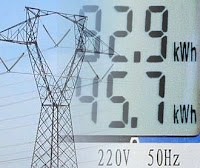 President Obama has promised to propel the US economy into the 21st Century by providing a massive push for Green initiatives like energy efficiency. The US will need to build more high-voltage transmission lines that can move renewable energy from isolated areas to cities. The introduction of smart grid technology is an efficiency initiative that will enable the US to save massive amounts of power. The utility industry estimates smart meters alone can cut electricity consumption by 20-30% during peak hours.

As reported in CNNMoney.com, “in 1950, 20% of the nation’s economic output was directly dependent on electricity. Now that number is 60% and rising fast, said Jesse Berst, editor of smartgridnews.com, an industry Web site. In an era of energy scarcity and global warming concerns, he said building a better grid is essential for economic growth. Berst, a former tech analyst, says the investments made in smart-grid technology over the next couple of decades will dwarf those that fueled the tech boom.”

On January 8, US President-elect Barack Obama renewed the call for investment “to begin work on a new ‘smart’ electric grid to replace the nation’s old, fragmented and inefficient system.”

Making this work will require considerable investment. The utility industry estimates it would cost about $50 billion to equip every home in the country with a smart meter. Melissa McHenry, a spokeswoman for American Electric Power, one of the country’s largest utilities, says an investment of $60 billion would enable the country to transport enough energy to offset 20% of its current total electricity use with renewable power.

The Brattle Group, a think tank, estimates the nation will need to spend up to $1.5 trillion on its electricity system over the next 20 years. Brattle estimates a smart grid could cost about $900 billion over the next two decades. That includes money for computers, meters and software to digitize the grid. An investment in cleaner energy could put the figure at $2 trillion, and would include building new power plants, transmission lines, and focus on conservation.

Grid Stocks
The ABB Group (ABB): Involved in a number of areas related to transmission and distribution systems. The company makes cables, transformers and various other products related to power electronics and management.

Allegheny Technologies, Inc. (ATI): Producer of products with grid applications, among them are a number of specialty alloys and metals for transformers and efficient grids.

General Cable (BGC): Makers of a range of cables, including transmission and distribution cables of different voltages and underground cables.

Quanta Services (PWR): A contractor to the power transmission and distribution industry, with services including infrastructure design, installation and maintenance.

Resin Systems (RS.TO): Makers of composite utility poles for electricity transmission and distribution. Although wood, concrete and steel still dominate, as in other applications, composites have great potential.

Siemens (SI): Makers of a range of products for the power transmission and distribution sector, including switchgear, transformer and substations.

Valmont Industries (VMI): Makers of transmission and distribution poles from concrete, steel or a mix of the two.

Expanding transmission capacity is only part of the challenge, making the transmission infrastructure digital makes it smarter and more efficient and this is a major priority of the Obama recovery plan. Here are some smart stocks that should benefit from Obama’s planned spending.

Itron (ITRI): Leading maker of smart meters, the key tool on the consumer end of a smart grid.

RuggedCom (RUGGF.PK): Designs critical systems for building a smart transmission and distribution including communication applications for electric utility substations and communication equipment embedded at various points of the grid.

Energy efficiency is a priority for the Obama administration and with the inauguration of the 44th President of the United States in less than a week, American electric grid companies make attractive buys, providing they have a strong balance sheet.