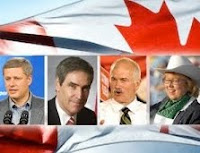 Here is an overview of the environmental platforms of the major federal parties. (As a regional party the Bloc Quebecois has not been included in this review).

Despite a deplorable track record on the environment, the Conservative Party is still trying to portray itself as green. The truth is they left Canadian oceans vulnerable to oil spills, made no progress on greenhouse gas emissions reductions, and blocked progress at international climate change summits.

The Conservative Party is nonetheless trying to take credit for establishing regulations on greenhouse gases and air pollution. They have preserved some land and marine areas, while banning toxic chemicals and creating new labeling guidelines.

The Liberal Party has a comprehensive plan to create clean energy jobs. If elected, Liberals will make an historic investment in clean energy and energy efficiency, quadrupling Canada’s production of renewable energy. They have also indicated they would create a cap and trade system with hard caps leading to absolute reductions in greenhouse gas emissions. The Liberal environmental platform includes a commitment to protect Canada’a air, oceans, waterways, forests and Arctic.

The New Democratic party rejects the claim of a fundamental contradiction between environmental health and economic growth. They advocate developing green energy industries as an opportunity for job creation as well as encouraging environmental technologies and practices, which in turn help to foster innovations in manufacturing.

New Democrats believe that reshaping energy policy for the 21st century means moving away from fossil-fuel dependence toward a green future by investing in energy derived from solar, wind, wave, and geothermal. They support working closely with Canada’s provinces and territories to share clean energy and ensure energy conservation in transportation and building methods. A New Democrat government will strive to make Canada a global environmental leader. They would achieve this goal by incorporating strong environmental standards in trade agreements and ensuring that Canadian companies operating abroad will be held to standards and practices that reduce their footprint and leave local ecosystems in good health.

The Green Party‘s Elizabeth May has said “I hold a vision of this blue green planet, safe and in balance. At the end of the Fossil Fuel Era, we are emerging to a new reality. We are ready to make the next leap – as momentous as abolishing slavery or giving women the vote. We are ready to make the fundamental shifts that allow us to live in balance with our life support systems, respecting each other, achieving social and economic justice, peace and democracy.”

The Green Party believes in sound fiscal management and strengthening the Canadian economy while ensuring that it is sustainable. They believe that government must provide needed social services while protecting our environment and human rights.

Elections in Canada are usually decided on economic issues, but what many fail to realize is that environmental concerns are also vital economic issues. A government that addresses the environment is positioning canada for a vibrant economic future. A government which avoids these issues is putting Canada at an economic disadvantge that will prevent the nation from being internationally competitive. Before deciding who they vote for on May 2nd, all Canadians should consider the environmental platforms of each party.

The budget that brought down the government offers insights into Conservative priorities. While the budget contained over one billion in oil and gas subsidies, it provides only $400 million for the ecoEnergy retrofit program.

As evidenced by their last five years in office and the budget, the Conservatives and environmental stewardship are like oil and water, they do not mix well.