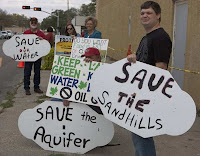 The state of Nebraska convened a special session of the legislature on Tuesday November 2, in a final ditch effort to stop or re-route the controversial Keystone XL pipeline project. The Nebraska Legislature’s special session will determine whether the state can force TransCanada Pipelines to reroute the pipeline around the ecologically sensitive Sandhills region overlaying the Ogallala Aquifer.

Opponents of the pipeline are hoping this session of the legislature will find a legal means of blocking or at least re-routing the project away from an important source of ground water.

Although there is considerable resistance, Nebraska’s governor, David Heineman, has yet to introduce a proposal on resiting the pipeline. “Normally when a governor calls a special session he introduces a bill, but the governor has not done that,” said Jane Kleeb of Bold Nebraska, which has been leading the protests. “We are afraid that they will hold a special session and not pass anything and say they have done their best.”

A state senator, Anne Dubash, is working on a separate proposal to give the state the authority to re-route the pipeline. There are also moves to try to block the pipeline by challenging TransCanada’s methods for obtaining land use rights.

Nebraska’s special session to stop the Keystone XL pipeline opened on Tuesday November 1, and is expected to last until at least November 14.

NRDC November 6 Protest Against the Keystone XL in Washington DC

NRDC November 6 Protest Against the Keystone XL in Washington DC