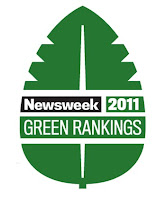 Despite a weak economy, government inaction and the failure of a comprehensive climate change agreement many of the globe’s big companies continue to move forward with sustainable initiatives.  “Big companies have decided that this is a long-term play,” says Thomas Lyon, a professor at the University of Michigan’s Ross School of Business.

Corporate executives see value in efficiency and minimizing waste. Cutting greenhouse gases can also improve the bottom line. Companies see the wisdom of managing resources and some are even preparing to benefit from resource scarcity.

Financial companies dominate the list because they have a relatively small footprint to begin with. IBM is second on the global list followed by a number of European companies. Due largely to Europe’s tighter regulatory environment, European companies dominate when it comes to transparent disclosure. In addition to the US and Europe, leading firms come from Australia, Brazil, India, Canada, Japan, and Mexico.

“We’ve been presented with a false choice: either great economic performance or great environmental performance,” says GE’s Mark Vachon. “But through innovation, we can solve both challenges.”

Here is the list of the top 25 greenest firms in the world including the country of origin and the sector in which they operate.