The BC Hydrogen Highway 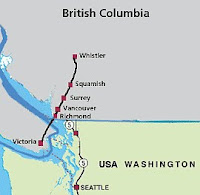 The Canadian province of British Columbia (BC) built a hydrogen highway system for the 2010 Olympics. The BC hydrogen highway runs between the cities of Vancouver and Whistler. It was designed to showcase zero-emissions hydrogen technology.

The province of British Columbia and BC Transit have also built hydrogen powered buses which were used as transport along the hydrogen highway during the Olympics.

These three programs are part of the Canadian Transportation Fuel Cell Alliance’s goal of moving Canada towards expanded use of hydrogen and fuel cell technologies.

Video: Putting a Price on Carbon in Australia

The Waste Hydrogen Utilization Project (IWHUP) in BC

The Waste Hydrogen Utilization Project (IWHUP) in BC