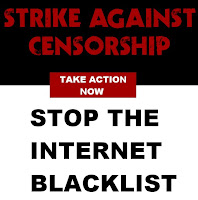 Right now, the U.S. Congress is considering legislation that could fatally damage the free and open Internet. The Green Market is joining many others that are protesting against the proposed legislation known as SOPA and PIPA.

SOPA and PIPA represent two bills in the United States House of Representatives and the United States Senate respectively. SOPA is short for the “Stop Online Piracy Act,” and PIPA is an acronym for the “Protect IP Act.” (“IP” stands for “intellectual property.”) In short, these bills are efforts to stop copyright infringement committed by foreign web sites, but, they do so in a way that actually infringes free expression while harming the Internet.

In addition to going after websites allegedly directly involved in copyright infringement, a proposal in SOPA will allow the government to target sites that simply provide information that could help users get around the bills’ censorship mechanisms. Such a provision would not only amount to an unconstitutional prior restraint against protected speech, but would severely damage online innovation. And contrary to claims by SOPA’s supporters, this provision—at least what’s been proposed so far—applies to all websites, even those in the U.S.

As First Amendment expert Marvin Ammori points out, “The language is pretty vague, but it appears all these companies must monitor their sites for anti-circumvention so they are not subject to court actions ‘enjoining’ them from continuing to provide ‘such product or service.’” That means social media sites like Facebook or YouTube—basically any site with user generated content—would have to police their own sites, forcing huge liability costs onto countless Internet companies. This is exactly why venture capitalists have said en masse they won’t invest in online startups if PIPA and SOPA pass. Websites would be forced to block anything from a user post about browser add-ons like DeSopa, to a simple list of IP addresses of already-blocked sites.

Perhaps worse, EFF has detailed how this provision would also decimate the open source software community. Anyone who writes or distributes Virtual Private Network, proxy, privacy or anonymization software would be negatively affected. This includes organizations that are funded by the State Department to create circumvention software to help democratic activists get around authoritarian regimes’ online censorship mechanisms. Ironically, SOPA would not only institute the same practices as these regimes, but would essentially outlaw the tools used by activists to circumvent censorship in countries like Iran and China as well.

Another dangerous provision in PIPA and SOPA that hasn’t received a lot of attention is the “vigilante” provision, which would grant broad immunity to all service providers if they overblock innocent users or block sites voluntarily with no judicial oversight at all. The standard for immunity is incredibly low and the potential for abuse is off the charts. Intermediaries only need to act “in good faith” and base their decision “on credible evidence” to receive immunity.

This provision would allow the MPAA and RIAA to create literal blacklists of sites they want censored. Intermediaries will find themselves under pressure to act to avoid court orders, creating a vehicle for corporations to censor sites—even those in the U.S.—without any legal oversight. And as Public Knowledge has pointed out, not only can this provision be used for bogus copyright claims that are protected by fair use, but large corporations can take advantage of it to stamp out emerging competitors and skirt anti-trust laws:

An Internet service provider could block DNS requests for a website offering online video that competed with its cable television offerings, based upon “credible evidence” that the site was, in its own estimation, promoting its use for infringement….While the amendment requires that the action be taken in good faith, the blocked site now bears the burden of proving either its innocence or the bad faith of its accuser in order to be unblocked.

PIPA and SOPA also still allow copyright holders to get an unopposed court order to cut off foreign websites from payment processors and advertisers. As we have continually highlighted, copyright holders already can remove infringing material from the web under the DMCA notice-and-takedown procedure. Unfortunately, we’ve seen that power abused time and again. Yet the proponents of PIPA and SOPA want to give rightsholders even more power, allowing them to essentially shut down full sites instead of removing the specific infringing content.

While this provision only affects foreign sites, it still affects Americans’ free speech rights. As Marvin Ammori explained, “The seminal case of Lamont v. Postmaster makes it clear that Americans have the First Amendment right to read and listen to foreign speech, even if the foreigners lack a First Amendment speech right.” If history is any guide—and we’re afraid it is—we will see specious claims to wholesale take downs of legitimate and protected speech.

PIPA and SOPA would also give the Attorney General new authority to block domain name services, a provision that has been universally criticized by both Internet security experts and First Amendment scholars. Even the blacklist bills’ authors are now publicly second-guessing that scary provision. But even without it, this section would still force many intermediaries to become the Internet police by putting the responsibility of censorship enforcement on those intermediaries, who are usually innocent third parties.

The Attorney General would also be empowered to de-list websites from search engines, which, as Google Chairman Eric Schmidt noted, would still “criminalize linking and the fundamental structure of the Internet itself.” The same applies to payment processors and advertisers.

SOPA and PIPA put the burden on website owners to police user-contributed material and call for the unnecessary blocking of entire sites. Small sites won’t have sufficient resources to defend themselves. Big media companies may seek to cut off funding sources for their foreign competitors, even if copyright isn’t being infringed. Foreign sites will be blacklisted, which means they won’t show up in major search engines. And, SOPA and PIPA build a framework for future restrictions and suppression.

In its current form, SOPA would require sites to actively monitor every site they link to, to ensure it doesn’t host infringing content. Any link to an infringing site could force the primary site offline.

SOPA and PIPA (and other similar laws under discussion inside and outside the United States) will hurt you, because they will make it impossible for sites you enjoy, and benefit from, to continue to exist.

Detailed information about these bills can be found in the Stop Online Piracy Act and PROTECT IP Act articles on Wikipedia.

GovTrack lets you follow both bills through the legislative process: SOPA and PIPA.

The most effective action you can take is to call your representatives and tell them you oppose SOPA and PIPA, and any similar legislation. Type your zipcode on Wikipedia’s locator box to find your representatives’ contact information. Text-based communication is okay, but phone calls have the most impact.

You can also go to the EFF site to take action against censorship.

If you do not live in the US Contact your local State Department, Ministry of Foreign Affairs, or similar branch of government. Tell them you oppose SOPA and PIPA, and any similar legislation. SOPA and PIPA will affect sites outside of the United States, and actions to sites inside the United States will also affect non-American readers. Calling your own government will also let them know you don’t want them to create their own bad anti-Internet legislation.