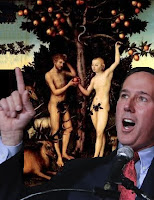 Republican presidential front runner Rick Santorum said President Barack Obama subscribes to a theological worldview that “elevates the Earth above man.” This is how the former Senator from Pennsylvania describes Obama’s belief in a fact based understanding of climate change.

On Saturday, February 17th, Santorum told an Ohio audience that he believed Obama adhered to “some phony theology; oh, not a theology based on the Bible, a different theology.”

On Sunday February 18th, Santorum explained his remarks on the CBS News program “Face the Nation.” Santorum said he was not questioning the fact that Obama is a Christian, he was referring to Obama’s environmental world view.

“I just said that when you have a world view that elevates the Earth above man and says that, you know, we can’t take those resources because we’re going to harm the Earth by things that frankly are just not scientifically proven — for example, that politicization of the whole global-warming debate — I mean, this is just all an attempt to centralize power and to give more power to the government,” he said.

“I’m talking about, you know, the belief that man should be in charge of the Earth and should have dominion over it and should be good stewards of it.”

Santorum is quite obviously confused about the science of climate change, but he even gets his theology wrong. Gen. 1:28 says “God gave Adam and Eve dominion in the earth.” According to Christian theologians, this means that the human race is supposed to nurture the earth, not dominate and exploit it.

“God gave men and women a privileged place among all creatures and commanded them to exercise stewardship over the earth.” (Genesis 1:26-28; Psalm 8:6-8). Stewardship implies caretaking, not abusing the planet for selfish motives.

Santorum has vigorously argued for anything but stewardship of the earth. He advocates more global warming causing oil and gas exploitation and he has dismissed the scientific consensus on anthropogenic climate change. Santorum makes it quite clear he thinks global warming is “junk science” and a “beautifully concocted scheme” created by the left.

Like the other GOP presidential hopefuls Santorum is an embarrassment to all those who believe in a scientific understanding of climate change.

Santorum is not above stoking the unfounded fears of the least savory elements of the GOP base. If any of the Republican candidates succeeds in winning the Whitehouse later this year, we may all have something to fear.

Related Posts
Foster Friess is the Climate Denying Money Man Behind Rick Santorum
Republican’s Anti-Science Stance on Climate Change
Right Wing War Against Sustainability
What is Wrong with the Right
The Koch Brother’s Ties to GOP Presidential Candidates
A Reintroduction to the Climate Denying Duo Known as the Koch Brothers
The Kochs’ War Against Obama and the Democrats
Koch Industries Financing Climate Denial
The Kochs’ Cato Institute’s Climate Denial
Protecting the Planet from Corporate Misrepresentation
The Foxes in the Henhouse: Republicans in Charge of Climate and Energy Committees