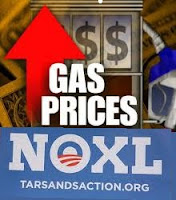 As fuel prices rise Americans need to understand that gaining access to Canadian tar sands oil will not decrease the price gas and it may even increase it. Republicans argue that with rising gas prices it makes no sense to hold up a project that could deliver to market an additional 830,000 barrels of oil a day.

Although Republicans are using rising gas prices as a rationalization to build the Keystone XL, the pipeline will actually increase the price Americans pay for Canadian oil by up to $4 billion a year or 10 to 20 cents more per gallon of gas in the midwest.

As reported by the NRDC, the pipeline would cause oil prices to rise in the Midwest, costing consumers more at the pump. Importing oil from Canada has never helped America get off the oil price rollercoaster. Over the last 11 years, the amount of oil we bought from Canada increased 50 percent, yet gas prices have tripled over that same period, with ups and downs along the way. The price of oil is subject to market forces, access to Canadian tar sands will not effect the price.

Democratic Senator Ron Wyden proposed an alternative on Wednesday that would ban exports of oil from the pipeline as well as refined products made from the oil.

Some refined products such as high-sulfur diesel and petroleum coke need to be sold outside the country, where there are markets for them. Keeping them inside the United States would increase the costs of the project and could lead to higher gasoline prices, Bernstein said.

The NRDC is helping people to take action to resist the pipeline. Click here to tell your leaders they must not play politics with a dirty energy project when the safety of our communities, farms, waters, and climate are at stake.