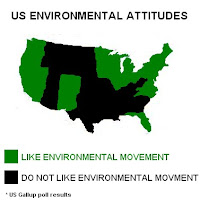 Polls suggest that Americans want to see their government act on
environmental issues, but they do not have much love for the environmental
movement. According to a number of different surveys, people in the US have
seemingly contradictory views on the environment. American public opinion may
be divided but there are some issues that enjoy the support of the majority.

Most Americans want to see government support for clean energy and they want
government to make climate change a priority issue. The majority of Americans see global
warming as an important issue, and regularly engage in behaviors that are good
for the environment.

The 2010 survey asked respondents whether they think the environmental movement has done more
good than harm, or vice versa, and a similar but slightly stronger pattern
emerges. In 2010, 22 percent said that the movement has “definitely done more good
than harm” and 40% that it has “probably done more good than harm,” for a total
of 62% holding a positive view. This reflects a decline of 13 points since 2000.