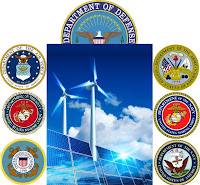 The US military continues to support clean energy and the Department of Defense is stressing the importance of reducing its dependence on fossil fuels. This view was reiterated at a May 11th event titled “Mission Critical: Clean Energy and the U.S. Military.” The DoD wants to reduce its use of fossil fuel, for both national security and economic reasons.

As reviewed in a Matter Network article the military is increasingly green for several good reasons, which includes:

– The military is 25 percent of government’s energy burden

– The Pentagon is biggest consumer of fossil fuels in the world, burning 300,000 barrels of oil per day at a cost of more than $30 million in fuel per day

– 1 out of every 50 convoys in a combat zone results in a casualty, and the Army has accrued more than 3300 fatalities in convoys since 2001

– Convoy and security costs $100 per gallon for combat zones

Senator Mark Udall of Colorado emphasized that the military is implementing many fuel-reducing technologies because of the high human price paid in getting fuel to the front lines. “Saving energy saves lives,” he said, adding that adopting clean energy technologies is “one of the most patriotic things we can do.”

According to Mark Mahoney, director of the Army Regional Environmental and Energy Office, one benefit to renewable adoption is that a platoon can reduce the load it carries by 700 pounds simply by replacing portable generators with solar chargers.

By 2025 the military plans to generate 25 percent of its energy from
renewable sources like solar and wind. An increasing number of military
facilities are now net zero including Fort Carson, Colorado, Fort Bliss
in El Paso, Texas.

From large scale projects to small scale endeavors the military is
increasingly reliant on renewable sources of energy.