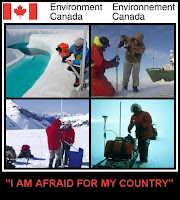 Here is an open letter written in May by a former employee of Environment Canada. She describes herself as “a Canadian that cares about science and the environment.” In this letter she gives an insiders perspective on what it is like to work for a government that is systematically dismantling Canada’s environmental protections.
___________________________________

My name is Naomi. I am Canadian. I worked for Environment Canada, our federal environmental department, for several years before our current Conservative leadership (under Stephen Harper) began decimating environmentalism in Canada. I, along with thousands and thousands of federal science employees lost any hope of future work. Their attitude towards the environment is ‘screw research that contradicts the economic growth, particularly of the oil sands’.

They have openly and officially denigrated anyone that supports the environment and opposes big-money oil profit as ‘radicals’.

Every day in Canada, new information about their vendetta on science and the environment becomes quietly public and keeps piling up. I have been privy to much first-hand information still because I retain friendships with my ex-colleagues (though my blood pressure hates me for it).

While I was working there, scientists were effectively muzzled from speaking to the media without prior confirmation with Harper’s media team – usually denied, and when allowed, totally controlled. Scientists were threatened with job loss if they said anything in an interview that was not exactly what the media team had told them to say. This happened in 2008. The public didn’t find out for years.

During one of my contracts, I was manager of a large, public database set. Contact information for all database managers was available for anyone. I knew what was going on with the information and could answer questions immediately and personally. During this time, I noticed that the media team started asking me “What would I say” to certain questions. I answered unwittingly. After a certain period of time, I noticed that all contact information had been removed from the internet –eliminating the opportunity for a citizen to inquire directly about these public data sets without contacting the media team. The Conservatives effectively removed another board from the bridge between science and the public, and I had inadvertently helped.

Since then, the Conservative government has been laying off thousands and thousands of full-fledged scientific employees that have been performing research for decades at Environment Canada, Department of Fisheries and Oceans, and Parks Canada, shutting down entire divisions and radically decimating environmental protection and stewardship in a matter of a couple years.

I am afraid for my country. Canada is the second largest land mass in the world – though our population is small, you can be sure that when a country that encompasses 7% of the world’s land mass, and has the largest coastline in the world says “screw it” to environmental protection, there will be massive global repercussions.

The Conservative leadership have admitted to shutting down environmental research groups on climate change because “they didn’t like the results,” are decimating the Species at Risk Act (our national equivalent of the IUCN Red list), are decimating habitat protection for fisheries, are getting rid of one of the most important water research facilities in the world (Experimental Lakes Area – has been operational since 1968, and allows for long-term ecosystem studies), are getting rid of almost all scientists that study contaminants in the environment, have backed out of the Kyoto protocol – and the list goes on and on and on.

Entire divisions of scientific research are being eliminated. Our land, our animals, our plants, our environment are losing all the protection that has been building for decades – a contradictory stance to the rest of the world. (Please see their proposed omni-bill that basically tells the environment to go screw itself, while also being presented in an undemocratic fashion that limits debate on any of the 70+ changes [http://tinyurl.com/89ys2nf]).

David Schindler, a professor from the University of Alberta (and founder of ELA) quoted. “I think we have a government that considers science an inconvenience.”

I am writing this to implore every single person to please – look into this subject, and help us, help ourselves. Contact your MP, the Fisheries minister, Stephen Harper, anyone, everyone. I can’t sit by and just post rants on my Facebook page anymore. Share this letter, discuss, anything. Canada is an important nation environmentally, and our leadership doesn’t give a fig for science or the environment. But we do. This Conservative minority leadership was voted in on a thin string in the lowest voter election turnout in recent history, but thanks to our ridiculous voting laws, have 100% full power to do whatever they want. And in the name of short-term monetary oil profit, they have realized that progressive science and the environment are threats (obstacles) to their goals, and are doing so many things to eliminate both.

We are depressed, and frustrated, and mad, and need all the help we can get to protect the value of science and our environment. In the age of globalization, intentionally non-progressive leadership is going to affect everyone. We share our waters, air, and cycles with all of you. Science IS a candle in the dark, and we cannot let greed extinguish that flame. What happens in Canada – will happen everywhere.

A Canadian that cares about science and the environment

**Update (May 22, 2012). There has been a huge overwhelming response to this letter. Over 40,000 people have viewed it, with hundreds of comments. There are a lot of different organizations that want to be part of a larger movement. There are also quite a few scientists who may want to speak out, but still cannot. I encourage anyone who wants to contribute and organize, and may desire to do it more discreetly (ie: anonymous and or/not as a public comment), to email me at deciphering.science@gmail.com. Please let your colleagues know as well. I will never publish your information unless you want me to, and will be organizing interested parties somehow, so that we can effect greater change – for ourselves, our freedom, and our beautiful planet.

**Update (May 25, 2012). An excellent opinion piece by a DFO scientist on the axing of the pollution programs at the Department of Fisheries and Oceans. http://www.environmentalhealthnews.org/ehs/news/2012/opinion-mass-firing-of-canada2019s-ocean-scientists

The Farce of Canada’s Carbon Capture