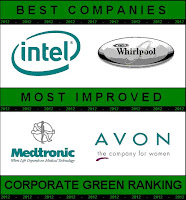 As reviewed in a June 4, 2012 Environmental Leader article, Computer chip maker Intel and home appliance manufacturer Whirlpool have been named as the major US firms with the strongest environmental governance, policies, and infrastructure in a report by sustainability consultants Soyka & Company. Intel maintained their top spot for 2012 in the Benchmarking Analysis of Disclosed U.S. Corporate Environmental Practices. Intel improved their score by five points, or 6.1 percent. Whirlpool moved up from tied for 28th place in last year’s study by virtue of a 25 point, or 41 percent, gain in its score.

Two companies, Avon Products and Medtronic, made dramatic
advances, rising from tied for 56th place to 6th, and from tied for
130th to tied for 23rd place, respectively. Each raised its score by
more than 25 points and 50 percent during this most recent two year
period.

The 970 firms included in the study are mainly drawn from the Russell 1000 list of large US corporations. Their scores are evaluated using the Governance and Environmental Management Strength, or GEMS, rating that evaluates the presence or absence of 50 distinct sustainability indicators. The GEMS scale was developed by Soyka & Company in conjunction with consultants IW Financial.

Eleven companies are ranked in the top 25 for the first time, displacing other firms. Some of those no longer in the top 25 such as Ball Corporation, Hess Corporation, H.J. Heinz, and Texas Instruments have made modest incremental gains in their scores but have been overtaken by others. Others, such as Gap, Inc., Merck, Symantec, Weyerhaeuser, and Xcel Energy have not kept pace, and in fact have experienced modest declines in their scores.

One former member of the top 25, Millipore, is no longer listed in the Russell 1000.

The report highlights Virgin Media, McGraw-Hill, Allstate, Owens Corning, and Waste Management for achieving high scores that are more than double that each of their nearest industry peer.

Some 126, or 13 percent of the total, of the largest publicly traded firms in the U.S. still have a total score of zero, meaning that they do not disclose any of the 50 individual pieces of information comprising The GEMS scale.

Intel was ranked fourth in a poll of the US’s best corporate citizens released in April by CR Magazine. Bristol-Myers Squibb topped the list followed by IBM and Microsoft.