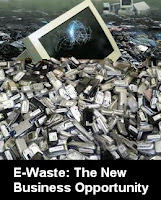 As reviewed in a recent TriplePundit article, recycling e-waste is an increasingly a lucrative business opportunity. According to the Consumer Electronics Association in 2012 global spending on consumer electronics will surpass $1 trillion for the first time. The problem is that consumers upgrade their “old” electronics every six to twelve months as opposed to every few years as in the past. This translates to 2.5 million tons of toxic electronic waste (e-waste) that ends up in landfills, and according to the U.S. Environmental Protection Agency only 25 percent of this gets recycled.

There is no question that e-waste is harmful to our environment. It contains toxic chemicals including lead, mercury, arsenic, and cadmium, which threaten and contaminate the water we drink and the air we breathe.

To help address this problem and seize on a lucrative business opportunity various companies are now getting involved with e-waste recycling. According to the Institute of Scrap Recycling Industries (ISRI), the US e-waste recycling industry generates $5 billion in revenue each year, up from less than $1 billion in 2002.

In a recent TriplePundit interview,
CEO David Edmondson spoke about how eRecyclingCorps saved one
manufacturer $150 million in the first 10.5 months simply by
refurbishing used mobile phones and giving them to customers who lose
their phones, which saves the company money from providing brand new
phones.

US households buy the largest percentage of electronics in the market but account for only 26 percent of the electronics recycling market.

To address these barriers retailers are getting involved. Best Buy is one example of a retailer that is profiting from reducing barriers to consumer electronic take-back programs. As reported in a recent GreenBiz.com article, Best Buy’s Senior Director of Environmental Sustainability confirmed that its Trade-In Program, which launched back in 2007, is finally profitable but it took time to transform the potentially cost-intensive problem of collecting e-waste into a cost-effective operation.

Best Buy has been able to generate two separate revenue streams: 1) Best Buy receives a percentage of the resold materials that have been recycled from the old electronics collected at retail stores – all done by the e-waste recyclers; and 2) Best Buy collects money from large consumer electronics manufacturers mostly as a result of state legislations that require these manufacturers to take responsibility for safe disposal of their products.

In a recent story in Adweek, John Shegerian, CEO of Electronic Recyclers International, which handles Best Buy’s e-waste recycling from the western states, added that, “40 [to] 60 million people have dropped off [their used] electronics and over 50 percent of those people bought something new.” This means that there could be a third revenue stream because customers who receive cash incentives from dropping off their unused electronics are more likely to spend money on other products as well. If we look at Best Buy as an example, we see that there is value in e-waste from a consumer electronics retailer point of view.

Right now there are 25 US states with laws requiring electronic waste to be recycled, and 23 of which require the manufacturer to take responsibility for safe disposal of their products. With the growing number of states requiring manufacturers to be responsible for the end product, manufacturers now have added pressure to recycle e-waste. Therefore, there is an opportunity for retail stores like Best Buy, Staples, Target and Wal-Mart, which specifically already have consumer electronic takeback programs, to capitalize on this added pressure by reducing the barriers for consumers to drop-off their old electronics.

We can see here that manufacturers can save money by being responsible environmental stewards.

Eventually we can expect that manufacturers will design more sustainable products and get more involved with the entire life cycle of the products they produce. In the interim cooperative efforts between retailers and manufacturers can play an important role in minimizing e-waste.

US Secretary of State at the Green Partnership for Growth Launch