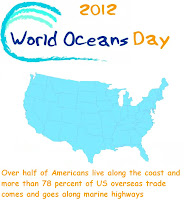 On World Oceans Day, people around the globe come together to celebrate our ocean and take action to protect it. The ocean not only makes our world livable, it provides us with food, water, commerce, recreation, and medicine. The ocean has suffered some serious blows lately: 90% of the big fish in the sea are gone, the gyres are filled with more plastic than previously estimated, the Deepwater Horizon disaster dumped 4.9 million barrels of oil into the Gulf of Mexico, and coastal dead zones from agricultural runoff are worse than ever.The ocean has definitely seen rough times lately, and World Oceans Day is a good opportunity to rally and start turning things around.

Most Americans would probably tell you that they support a healthy ocean—after all, the beach is one of our all-time favorite vacation spots. But how does the Nation as a whole feel about protecting the ocean? The Ocean Project’s ongoing survey http://theoceanproject.org/marketresearch of more than 30,000 Americans, both young and old confirm our gut feeling that Americans care about healthy oceans; and has further insight on what Americans think and feel about ocean conservation.

We don’t realize the ocean is in danger

Most Americans think that the ocean is healthy and “too vast” for individual action to have an impact. (The exception to this is in the wake of catastrophic events such as the Deep Water Horizon disaster. In fact, the American public believes that ocean waters bordering the US are significantly less imperiled than are “foreign” waters.

We have short attention span

In the wake of the 2010 oil spill in the Gulf of Mexico, the American public was very concerned about the health of the ocean, believing it to be threatened. But in a few short months (by Aug 2010 – four months after initial explosion), the level of concern was on the decline.

‘My actions have little impact on ocean health.’ is the general sentiment when respondents are asked ‘In your opinion, how much of an impact can individual people have on solving our environmental problems?’. Even more troubling: 40% responded ‘None” or – “Not very much.’

In 2010, 22% considered themselves to be active in the environmental movement, and 57% said they were sympathetic but not active.

The children are indeed our future

Young people were the most knowledgeable about environmental ocean issues, and parents look to them for guidance when making green household decision-making. They also were overwhelmingly more likely to believe that the actions of individuals can make a difference!

It’s time to transform that concern and “green-friendliness” into action! Let us come together this June 8th and take action for our world ocean.

Related Posts
World Oceans Day 2012
Urgent Appeal to Save our Oceans
Five Water Related Events (June and July 2012)
Melting Arctic Ice is Releasing Massive Amounts of Methane
Marshall Islands World Ocean Day 2012
State of the Climate Global Analysis Nov 2011
Seven Ways to Save the Seas
Air and Water in the OECD Report
OECD Environmental Outlook to 2050: The Consequences of Inaction
Water as a Weapon of War