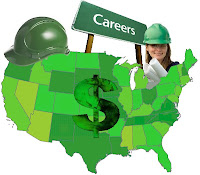 Demand for green technology and sustainable energy solutions is helping the US economy and providing new jobs. Two new reports, one from the Brookings Institution and another from the US Bureau of Labor Statistics convincingly make the point the America is benefiting from green technology and renewable energy. These reports make it harder for critics to deride the virtues of the green economy. This message is particularly important for Republicans who continue to advocate for an economy premised on old energy paradigms.

According to a report from the Brookings Institution estimates that between 2008 and 2011, the number of green jobs in the US grew 260 percent from 750,000 to 2.7 million. According to this report, there are now more jobs being created in the green technology and renewable energy industries than in the fossil fuel sector.

The US Bureau of Labor Statistics, reports that the manufacturing sector has experienced strong growth adding 489,000 new jobs between 2010 and 2011 much of which has come from cleantech. The Brookings Institution report indicates that more than a quarter (26 percent) of cleantech jobs are in manufacturing.

In addition to environmental benefits and jobs there are cost savings associated with developing and manufacturing energy storage technology. Perhaps most importantly this provides a national competitive advantage. This will only improve going forward. As these new technologies are produced more efficiently and in greater numbers their costs will fall which will in turn increase demand.

Cleantech manufacturing is essential to increase the America’s renewable energy output. In addition to a cleaner environment and a more sustainable manufacturing infrastructure, the benefits include jobs, economic growth, cost efficiency and savings.

If the US wants to be competitive it must take the initiative in design and manufacture innovations in renewable energy.

US Small Businesses are Creating Jobs and Contributing to Greentech Innovation

US Small Businesses are Creating Jobs and Contributing to Greentech Innovation