Apple’s Reversal on EPEAT Says a Lot About Consumers

by Richard Matthews
in Business and Economics, Leadership, Other
0 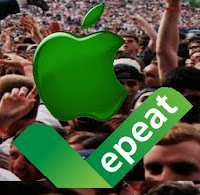 After dropping Electronic Product Environmental Assessment Tool (EPEAT) certification, Apple succumbed to pressure and reversed its decision. In June Apple announced that it will withdraw from EPEAT, than on Friday July 13, Apple said it will return to EPEAT certification program (with the exception of its new MacBook Pro Retina model).

The decision says two things, the first it says that Apple will go where the money is. What is really noteworthy is that fact that the public is interested in green certification and it is willing to let companies know about it.

The soon to retire Apple hardware SVP Bob Mansfield said “We’ve recently heard from many loyal Apple customers who were disappointed to learn that we had removed our products from the EPEAT rating system.”  “I recognize that this was a mistake.” Mansfield said.

This decision not only reflects Apple’s desire to meet their customers expectations, it is also a move that will benefit the company’s eligibility for government and academic IT contracts, many of which require EPEAT certification.

Mansfield wants to make sure that his company is identified as green by consumers. He insists that Apple continues to lead the industry in its environmental practices. “[W]e make the most energy-efficient computers in the world and our entire product line exceeds the stringent ENERGY STAR 5.2 government standard,” he wrote. “No one else in our industry can make that claim.”

This is a cautionary tale for businesses large and small. Apple’s actions demonstrate that no business can afford to ignore the demand for greener products. More than anything else, Apple’s environmental efforts indicate that they are responsive to consumer’s green sensibilities.

What are the different economic systems and what is a sustainable economy? These are important questions that need to be asked in light of the fact that the prevailing economic...

When it comes to the economy there are many ways that we can categorize different approaches . One of the ways we can do this is through color-coding these different...