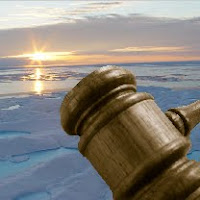 A coalition of conservation groups filed a lawsuit on July 16th to protect the Arctic Ocean from Shell’s exploratory drilling scheduled to get under way in August. The legal papers filed in U.S. District Court in Anchorage challenges the oil spill cleanup plans for Shell Alaska’s upcoming operations in the Beaufort and Chukchi seas. Shell claims it has already spend $4 billion on the drilling operation. The suit invokes the Oil Pollution Act of 1990, a tough law passed in the wake of the 1989 Exxon Valdez oil spill. This act imposes strict standards on companies in the Arctic Ocean involved with oil and gas drilling and transport.

By Shell’s own admission Arctic drilling is the “most complex, most difficult wells we’ve drilled in company history.” An oil spill in the Arctic Ocean would be almost impossible to clean up and because of the remote setting and extreme cold, it could take years to control. Oil would probably become trapped under the ice, making it impossible to remove. An oil spill in the Arctic ocean could prove devastating to whales, polar bear, seals, and fish. Such a spill would also be devastating to the local people, as 79-year-old Abagail Nashupuq of Point Hope told CNN recently,

“our subsistence for the winter, it all comes from the ocean, the fish and whale. It’s going to ruin our ocean.”

The suit names the federal Bureau of Safety and Environmental Enforcement, which earlier this year approved separate Oil Spill Response Plans, or OSRPs, for the Beaufort and Chukchi seas.

“This lawsuit is not just about this summer. It’s about the future of the Arctic Ocean,” said Michael LeVine, Pacific senior counsel for Oceana, one of 10 plaintiffs. Others include the Alaska Wilderness League, the Sierra Club, Earthjustice and the Center for Biological Diversity.

Shell's Game with the Future of the Arctic