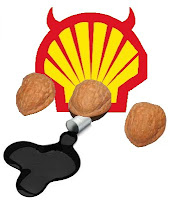 Questions are being raised about Shell’s ability to manage its oil and gas drilling operations in the Arctic Ocean. The company is reneging on its emissions commitments and is already having trouble with the ships tasked to locate fossil fuels.

Right before it begins its drilling operations in August, Shell is trying to change the terms under which it was granted permission to drill. In an application to the agency, dated June 28, Shell said they cannot meet the requirements for emissions of nitrogen oxide and ammonia of an air permit granted by the Environmental Protection Agency (EPA) in January. Shell has asked the EPA to loosen air pollution requirements for its Discoverer drill rig and to a lesser extent its Kulluk drill ship.

“This is a classic bait-and-switch.”

“Shell promises the E.P.A. — and by extension, the American people — anything that will allow it to get permits to drill the Arctic, and then at the last minute, Shell says it won’t abide by its agreement and wants the E.P.A. to issue watered-down permits with no process whatsoever,” Greenpeace’s executive director, Phil Radford said.

“This is just one more in a litany of broken promises from Shell when it comes to drilling in the Arctic,” Radford said.

Shell has run into problems even before drilling begins. The Discoverer, one of the ships shell is using to explore the Arctic Ocean, slipped its mooring and drifted close to one of Alaska’s Aleutian Islands.

Questions have also been raised in June about the durability of one of Shell’s underwater oil spill containment vessels in severe weather.

These events are leading many to question Shell’s ability to protect the Arctic from its oil and gas drilling operations. As one Shell official stated, “even a near miss is unacceptable.”