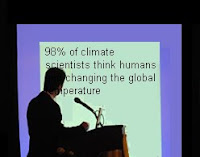 The science exploring mans role in global warming is getting stronger. A new study revealed more than two dozen climate “indicators” were revealed in an annual State of the Climate report released which was released on July 10. A related study went further saying man-made global warming is already increasing the likelihood of extreme weather. These are the finding in the State of the Climate 2011 report, published by the National Oceanic and Atmospheric Administration (NOAA) and the American Meteorological Society (AMS).

Global carbon dioxide concentrations which hit a new all-time high of 390 parts per million last year and 2011 was one of the warmest La Nina years on record. In the Arctic, 2011 had the second-lowest sea ice extent on record. Generally speaking the dry regions are getting drier and the wet regions are getting wetter.

The companion climate assessment notes that global warming has already increased the odds for extreme events, including the Texas drought. The 2011 growing season was by far the warmest and driest in Texas history, and the drought was the worst one-year drought on record there as well, costing billions in agricultural losses.

The study concluded that, due to anthropogenic global warming, La Nina-related heat waves are now 20 times more likely to occur in Texas than they were 50 years ago.

The overriding theme that emerges from these reports is that we are already feeling the effects of man made global warming and this will only get worse, particularly if we do nothing about it.