Led by Quebec Canadians Believe that Climate Change is Real 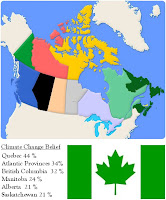 Of all Canadian provinces, Quebec is most likely to accept the reality of climate change, while people in the Prairies are the most resistant. According to IPAC-CO2 Research Inc., only two per cent of Canadians believe that climate change is not occurring. However, when it comes to the cause of climate change or what to do about it, Canadians are woefully ignorant.

While most Canadians believe that Climate Change is real (54%), the majority still do not attribute it to human activity. When asked about anthropogenic climate change the East is better informed than the West. When asked whether they believed climate change is a man made phenomenon, twice as many people from the East agreed with the statement.

“Our survey indicates that Canadians from coast to coast overwhelmingly believe climate change is real and is occurring, at least in part due to human activity” explained Dr. Carmen Dybwad, CEO of the environmental non-government organization. “These findings have been consistent from 2011 and 2012. Canadians care about issues like extreme weather, drought and climate change.”

“Canadians most commonly (54%) believe that climate change is occurring partially due to human activity and partially due to natural climate variation,” said Briana Brownell of Insightrix Research, who conducted the survey for IPAC-CO2.

When it comes to what to do about it, 35% of Canadians believe the priority should be to promote cleaner cars running on electricity or low-carbon fuels while only 13% favored a tax on carbon dioxide emissions from the whole economy. The strongest support for a carbon tax comes from Quebec (24%) while the least support comes from B.C. (6%).

Rather than support low or zero carbon solutions, the study suggests Canadians seem to prefer Carbon Capture and Storage. Although 71% of residents of Quebec indicated they would be concerned about carbon sequestration.

This research was conducted by Insightrix Research, Inc. on behalf of IPAC-CO2. This online survey of Canadian residents was collected from 1,550 Canadians between May 29 and June 11, 2012.

Related Posts
The US is More Accepting of the Science of Climate Change
Earth Day Poll: Environment is Important

US Wants Government Action on the Environment

The World “Connects the Dots” Between Extreme Weather and Climate Change

The GfK MRI Survey of the American Consumer™