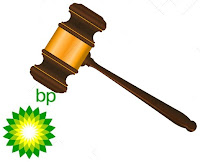 A recent US Justice Department court filing, accuses British Petroleum (BP) of gross neglect, as well as making false and misleading comments. The accusations stem from BP’s handling of the 2010 explosion of the Deepwater Horizon that spilled 5 million barrels of oil into the Gulf of Mexico and killed 11 workers.

The Justice Department alleges false statements and misrepresentation over BP’s assertion that the Gulf Coast’s natural resources are making a “robust recovery” from its massive 2010 oil spill.


The legal papers filed by the US Justice Department charge that BP is guilty of falsehoods in the $7.8 billion settlement with thousands of Gulf Coast residents and businesses harmed by the spill.

The government’s 37-page objection to BP’s legal claims say the corporate giant is guilty of a “culture of corporate recklessness” that led to the Deepwater Horizon disaster.

The challenge seeks to hold BP responsible for a wide array of environmental impacts including dying deep-sea corals, dead dolphins, sick fish and marsh oil. They also allege that BP is ignoring the long-term neurological damage to clean-up workers and other Gulf residents who were exposed to the toxic dispersant Corexit.

In another separate filing, Alabama also accuses the oil company of misrepresentation and argues that BP committed ‘willful misconduct’ by attempting a risky ‘top kill’ method to stop the 2010 spill, when it knew that method would fail.

BP’s TV commercials whitewash what is really going on in the wake of their unprecedented oil spill in the Gulf. It is blatantly dishonest to suggest that everything is back to normal.

The Alabama filing notes that BP misrepresented the flow rate indicating that it was 5,000 bpd (barrels per day), even though they new is was significantly higher.

The court challenge could force BP to pay billions of dollars in fines for the worst offshore oil spill in US history. At the very least it is a warning to all who would cause destruction to the environment.