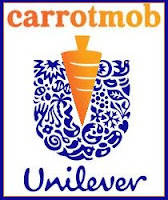 Carrotmob is a social venture organization that harnesses the influence of consumers on sustainable consumption. Carrotmob organizes crowdsourced “buycotts,” in which consumers use their purchasing power to push businesses to be more sustainable. Now Carrotmob is joining forces with Unilever, one of the world’s largest consumer packaged goods companies.

Brent Schulkin, the founder of Carrotmob staged his first campaign in 2008, with a small liquor store in San Francisco that installed energy-efficient lighting. Most recently Carrotmob worked with Thanksgiving to develop a campaign to help finance wind powered transportation of coffee.


Over the last four years Carrotmob has been part of more than 250 campaigns in 20 countries with small and medium-sized businesses. Their new partnership with Unilever is part of their efforts to scale up their operations to include bigger companies.

Carrotmob consumers around the world will determine what action they would like to see from Unilever. Within a year the first campaign will decide the products they want to support, the actions which will be taken and sales goals.

With campaigns that create emotional bonds and cultivate authentic relationships, Carrotmobs may well be the future of cause marketing.

The Green Elements of the First 2012 Presidential Debate

The Green Elements of the First 2012 Presidential Debate