September 2012 was the Warmest in Recorded History 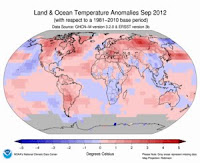 A wide range of temperature data indicate that the earth continues to get warmer. September 2012 was tied for the warmest September since the dawn of temperature records. These were the findings of the State of the Climate Global Analysis, September 2012 from the National Oceanic and Atmospheric Administration (NOAA) National Climatic Data Center.

Following the second warmest summer (June–August) for Hungary since national records began in 1900, monthly temperatures remained above average across the entire country during September, ranging from about 1.0°–3.5°C (1.8°–6.3°F) above the 1971–2000 average, according to the country’s national meteorological service, Országos Meteorológiai Szolgálat.

Australia experienced its third warmest September since records began in 1950, with the nationally-averaged maximum temperature 1.94°C (3.49°F) above the 1961–1990 average. The minimum temperature was also above average but not quite as extreme as the maximum, at 0.42°C (0.76°F) above the long-term average.

As indicated in the land and ocean temperature percentiles map above, Japan observed record warmth during September. According to the Japan Meteorological Agency, the greatest warmth was observed across northern Japan (regions of Hokkaido and Tohuko), which was 3.7°C (6.7°F) above average. It was below average across Okinawa, which had been impacted by Super Typhoons Sanba (middle of the month) and Jelawat (end of the month).

Using Trees to Generate Electricity is Not Green Energy