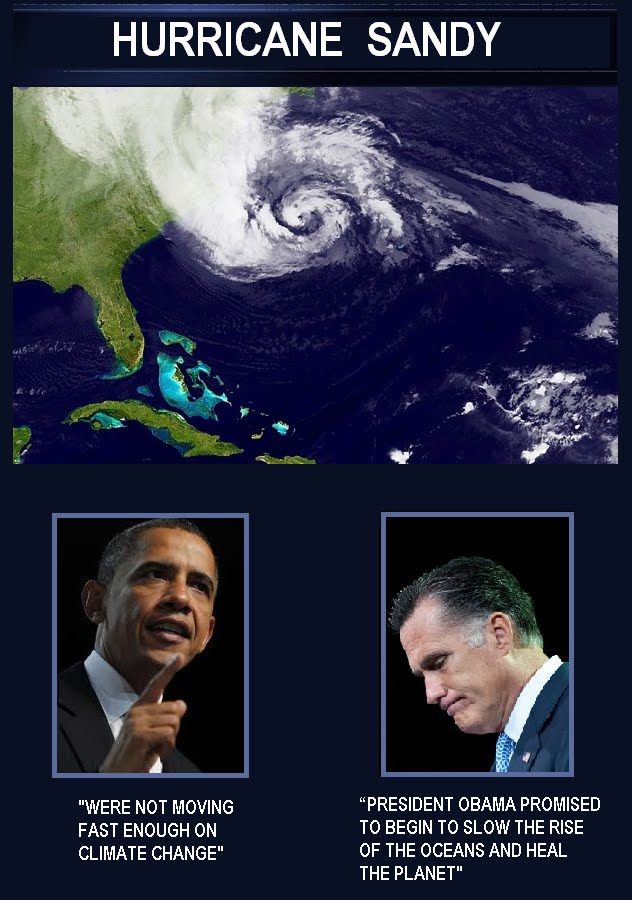 Hurricane Sandy wreaked massive
destruction on the U.S. east coast. What is particularly noteworthy is the
fact that this super-storm traversed a section of ocean that is typically too
cold to form hurricanes. In addition to 90 mph (144 kph) winds and massive
amounts of rain there was up to 3 feet of snow in West Virginia and other areas. The storm was accompanied by record low barometric pressure that pushed the
storm far inland. Hurricane Sandy combined with two other weather systems to
become a huge mega-storm. The super-storm ploughed well into the Midwest causing
waves exceeding 24 feet (7.2 meters) on Lake Michigan. Even more destructive
were the record storm surges of 14-feet (4.27-meters) that struck the coasts of
both New York and New Jersey. The impact of Sandy prompted New Jersey Gov. Chris Christie to say “The level
of devastation at the Jersey Shore is unthinkable,” he said. “It is beyond
anything I thought I’d ever see…it is a devastating sight right now.”

Even before Hurricane Sandy made landfall in the U.S., it had already killed 69 people in the
Caribbean. In the U.S., at least 75 people are known to
have been killed by the storm so far. The mega-storm caused power failures
in 17 states, depriving 8.2 million people of
electricity.

The storm also destroyed property and disrupted business. Before Sandy hit,
federal disaster declarations indicate that winter storm losses have doubled since the 1980s. In
2011, thunderstorms caused over $25 billion in damages in the U.S., more than
double the previous record.

As reported by Bloomberg, the total economic loss from the Hurricane could
exceed $20 billion, including insured
losses of about $7 billion to $8 billion. These costs could subtract 0.1 to 0.2
percentage points from US gross domestic product in the fourth quarter. The
industry forecasting firm IHS Global Insight estimates the costs of Sandy could
be as high as $50 billion in damages and lost business.

The hurricane killed 10 people in New York City and left parts of the
nation’s largest city under water and up to one million people in the dark. The
New York Stock Exchange was closed for the first time since the September
11th terrorist attacks and this was the first time it’s been closed
for two consecutive days due to weather since 1888. Rising flood waters set cars
adrift and toppled dumpsters. The storm shut down air travel, buses, trains and
subways.

The 108-year-old subway system “has never faced a disaster as devastating as
what we experienced last night,” Chairman Joseph Lhota said in a
statement. It was “a devastating storm, maybe the worst that we have ever
experienced,” said Mayor Michael Bloomberg, who was unable to say when
the city’s basic services would be restored.

In addition to destroying buildings, the hurricane flooded tunnels and the
city’s subway system. More than 80 flooded homes in Queens caught fire and were
destroyed in an enormous blaze. Hospitals were forced to remove patients on
stretchers including babies from neonatal intensive care. Sandy also caused a
crane to break and it now hangs precariously over a Manhattan neighborhood. On
Staten Island, a tanker ship ended up being beached on the shore.

“This will be one for the record books,” said John Miksad, senior vice president for
electric operations at New York’s Consolidated Edison.

It is difficult to refute the observation that climate change is increasing
extreme events in severity and intensity. A 2012 special report
on extreme weather from the Intergovernmental Panel on Climate Change (IPCC)
concluded that coastal flooding and more extreme precipitation were strongly
linked to human-induced climate change and are expected to get worse in the
future.

It is a well documented scientific fact that carbon and other GHGs fuel
extreme weather. The super-storm was made worse by higher sea levels and warmer
oceans.  Hotter land temperatures may also allow hurricanes like Sandy to expand
their traditional seasonal and geographic boundaries.

Although a single weather event cannot be taken as proof of global warming,
when pooled together, the growing number of record setting data points provides
a convincing picture. According to NOAA, the weather in 2011 was a “year for the
record books.” In 2011, there were 14 record climate and weather-related events,
each causing at least $1 billion in damage. Hurricane Irene alone caused more
than $7 billion in damages. In 2012, Hurricane Sandy caps off another record
breaking year. This year, the U.S. experienced the hottest January to June ever
recorded and the largest drought in more than 50 years. There has also been
record rainfall and flooding across much of America in 2012.

Melting ice and water expansion is directly linked to climate change causing
global sea levels to rise. Sea levels stretching from Boston to Norfolk, Va. are
rising four times as fast as the global average. The sea surface temperatures
off the coast of the U.S. northeast are about five degrees [3C] above average
and second-highest global ocean temperatures on
record were documented in September.

As explained by climatologist Kevin Trenberth in an article in The Conversation, “With
every degree C, the water holding of the atmosphere goes up 7%, and the moisture
provides fuel for the tropical storm, increases its intensity, and magnifies the
rainfall by double that amount compared with normal
conditions.”

“In all likelihood, we have to regard this finding as an initial
climate-change footprint in our U.S. loss data from the last four
decades.”

Mike Tidwell, director of Maryland’s Chesapeake Climate Action Network and the
author of the 2006 book The Ravaging Tide,
said:

“Everybody knows we’ve warmed the planet. So all super-storms are related to
climate change now. You can’t have a super-storm that’s not related to climate
change. Does everyone agree that the oceans have warmed? That land temperatures
have increased? That there’s more moisture in the air?” Tidwell posited. “The
answer is yes. So it’s impossible to have a super-storm that doesn’t have the
fingerprint of climate change on it.”

“There has been a series of extreme weather incidents. That is not a
political statement that is a factual statement. Anyone who says there is not a
dramatic change in weather patterns I think is denying
reality.”

The National Survey of American Public
Opinion on Climate Change, conducted in December 2011, shows that more
Americans are accepting the facts about climate change and personal observation
of weather events seem to be playing an instrumental role.

According to the survey, 62 percent of Americans agreed that there is “solid
evidence that the average temperature on Earth has been getting warmer over the
past four decades.” This number represents a 7 percent increase from the spring
of 2011 and 10 percent higher than in the spring of 2010.

“Many of our respondents pointed to their own experience with hotter
temperatures, storms or droughts,” says senior Brookings fellow Barry
Rabe. “In increasing numbers, Americans are making the connection between
weather and their belief about global warming.”

Another survey by the Yale Project on Climate Change and
the George Mason University Center for Climate Change reported that 70
percent of Americans believe that global warming is real.

The massive storm hit just one week before Election Day. It is a tragic irony
that President Barack Obama and Republican nominee Mitt Romney have largely
avoided the topic of climate change.

“The irony is that the two presidential candidates decided not to speak about
climate change, and now they are seeing the climate speak to them,” Tidwell
said. “That’s really what’s happening here. The climate is now speaking to them
— and to everyone else.”

In addition to Hurricane Sandy, the wildfires and droughts we saw this summer
should give voters pause for thought. Hurricane Irene and other extreme weather
events in 2011 illustrate a trend of worsening weather conditions conveying the
urgent need for consorted efforts to combat climate change.

“Sandy is yet another reminder that the candidates should stop competing over
who can poison the weather faster with increased oil, gas and coal production,”
said Brad Johnson, campaign manager
at ClimateSilence.org, a website aimed at getting the candidates to make climate
change a major part of the election-year debate. “If they fear that honesty
about global warming could cost them votes, they should instead be more
concerned that climate silence costs lives.”

Although late in the campaign, President Obama has spoken about the need to
address climate change in an MTV interview:

“We’re not moving as fast as we need to,” the President said. “And this is an
issue that future generations, MTV viewers, are going to have to be dealing with
even more than the older generation. So this is a critical
issue.”

President Obama declared a major disaster in New York and Long Island, making
federal funding available to residents of the area. Obama also cancelled
campaign events to focus on coordinating the response to the mega-storm.

For his part, Mitt Romney continued his irresponsible campaign of climate
denial despite warnings from scientists which indicate that continuing to burn
fossil fuel will guarantee climate chaos.
Romney has said he remains unconvinced about the veracity of anthropogenic
climate change and if elected, he has vowed to increase America’s commitment to
fossil fuels. Romney is on record mocking rising ocean
levels. He has even argued that FEMA’s budget should be slashed, or worse still,
he has suggested that emergency management services should be taken away from
the federal government and given over to private companies.

The GOP’s commitment to climate denial did not waver even though Hurricane
Isaac forced the cancellation of the first day
of the Republican National Convention in Tampa. At least one poll suggests the
American public does not agree with the GOP’s position. According to a Yale-George Mason survey,
Americans think global warming should be a priority of the President and
Congress. Although Romney is unlikely to change his stance on climate change,
Sandy may encourage Americans to express a diverging view on Election Day.

Rather than simply react to its effects, we need to engage the causes of
climate change. As Bill McKibben explains, the fossil fuel
industry is driving the climate crisis and spending millions to derail
solutions. In October, Chevron made the single biggest corporate political
donation since the Citizens United verdict. Thus far, the fossil fuel industry
has spent more than $150 million to influence this year’s election.

We need to heed the warnings offered by Katrina, Irene and now Sandy. We
need to expedite the transition away from fossil fuels, increase support for
renewable energy and overturn Citizens United. However, there will be no hope of
achieving any of these goals if Republicans take the White House.
Those who want to know what weather will look like if we do nothing to manage
climate change need look no further than Hurricane Sandy. This super-storm was
the consequence of a one degree rise in temperature, think of the devastation
that will be wrought if we continue on our current trajectory and realize the
predicted temperature increases of four or five degrees.

While climate change may not be a high-profile issue this election cycle,
Sandy is an October surprise that should remind voters of the dire implications
of a world ravaged by climate change.

Red states produce and consume more carbon than blue states. This holds true for both Republican state economies and the lifestyle choices of citizens in red states. GOP-controlled states produce...

Major banks may be slowly backing away from financing some fossil fuel infrastructure, but they fund a wide range of projects that contribute to climate change and biodiversity loss.  While...

There were a record number of extreme weather events and climate related disasters in 2020.  An ever warming planet has increased both the intensity and the frequency of these events....

Red states produce and consume more carbon than blue states. This holds true for both Republican state economies and the...

America’s Most Popular Purveyor of Climate Disinformation is Dead

Climate Action: Why We May Finally Do What Needs to be Done