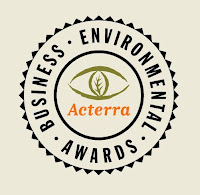 Founded in 1990, Acterra’s Business Environmental Awards is one of the Bay Area’s oldest and most prestigious environmental recognition programs. The program’s goals include celebrating the accomplishments of businesses with innovative sustainable programs, recognizing leaders in the industry, and providing an educational forum that increases awareness and motivates all companies to adopt sustainable business practices.

Since its inception, the program has recognized over 150 businesses and organizations for exemplary environmental leadership.

Acterra’s highest award recognizes businesses whose programs achieve significant triple bottom line benefits (people, planet, profit) and advance the state of sustainability in a given industry or across industry sectors. Model programs are established and holistic; promoting sustainability throughout the entire value chain and permeating most key business functions.

Rewards the successful implementation of a new or significantly improved environmental product, solution or technology, such as a new business service, a new invention or a new way of solving an environmental problem.

Rewards a building project that conserves natural resources and promotes the health and well-being of its occupants.

To apply for Acterra 2013 Business Environmental Awards complete the application by Friday, December 7, 2012. Finalists will be announced February 1, 2013
awarddes will be announced on March 18, 2013. Application instructions are included in the downloadable 2013 Information and Guidelines packet. For questions regarding how to apply, please contact Awards Program Director Ariane Erickson at 650-561-4711.

Newsweek’s Greenest Retailers in the US (2012)

The Costs of Oil: BP Liable for up to 90 Billion

The Costs of Oil: BP Liable for up to 90 Billion