In the US 2012 is the Hottest Most Extreme Year Ever 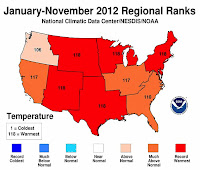 A warm November and record-breaking early December means 2012 will be the warmest year ever for the U.S. As Jeff Masters reports:

…the U.S. heated up considerably in November, notching its 20th warmest November since 1895, said NOAA’s National Climatic Data Center (NCDC) in their latest State of the Climate report. The warm November virtually assures that 2012 will be the warmest year on record in the U.S. The year-to-date period of January – November has been by far the warmest such period on record for the contiguous U.S.–a remarkable 1.0°F above the previous record. During the 11-month period, 18 states were record warm and an additional 24 states were top ten warm. The December 2011 – November 2012 period was the warmest such 12-month period on record for the contiguous U.S., and the eight warmest 12-month periods since record keeping began in 1895 have all ended during 2012.

The NCDC’s Climate Extremes Index (CEI), which “tracks the percentage area of the contiguous U.S. experiencing top-10% and bottom-10% extremes in temperature, precipitation, and drought,” reports it has also been the most extreme January to November period on record. Some 46% of the continental U.S. saw top-10% extreme weather, which is more than double the average:

A record 86% of the contiguous U.S. had maximum temperatures that were in the warmest 10% historically during the first eleven months of 2012, and 71% of the U.S. of the U.S. had warm minimum temperatures in the top 10%–2nd highest on record. The percentage area of the U.S. experiencing top-10% drought conditions was 32%, which was the 4th greatest since 1910. Only droughts in the Dust Bowl year of 1934, and during 1954 and 1956, were more extreme for the January – November period. Heavy 1-day downpours have been below average so far in 2012, though, with 9% of nation experiencing a top-10% extreme, compared to the average of 10%.

Again, given the record-smashing temperatures in early December, 2012 also seems likely to set the extreme weather record. Finally, recent NOAA reports make clear that much more record-breaking extreme weather is in our near future:

Globally 2012 is One of the Hottest Years on Record

Globally 2012 is One of the Hottest Years on Record