by Richard Matthews
in American Politics, Other, Politics
0 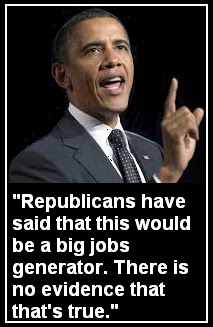 On Saturday July 27, US President Barack Obama said the number of permanent jobs created by the Keystone XL pipeline would be between 50 and 100. That is far less than the tens of thousands touted by supporters of the pipeline. If it goes forward the Keystone XL which would ferry tar sands oil from Alberta Canada to the US Gulf Coast. A decision on the fate of the pipeline is expected late this year or early in 2014.

“Republicans have said that this would be a big jobs generator,” Obama said in a New York Times interview, “There is no evidence that that’s true. The most realistic estimates are this might create maybe 2,000 jobs during the construction of the pipeline, which might take a year or two, and then after that we’re talking about somewhere between 50 and 100 jobs in an economy of 150 million working people.”

Republicans and many business groups are pushing the administration to approve the pipeline while climate scientists and environmental groups are urging the administration to kill the project. Advocates for the pipeline have consistently justified the climate destroying pipeline as an economic boon and a great way to invest public money. Opponents to the pipeline point to the huge amount of emissions generated by fossil fuels and the tar sands in particular. James Hansen the recently retired NASA climate scientist and adjunct professor in the Department of Earth and Environmental Sciences at Columbia University, has referred to the building of the Keystone XL as “game over” for efforts to combat climate change.


Considering the $5.3 billion price tag for the pipeline that translates to at least 53,000,000 per permanent job. This is somewhat ironic given the criticisms leveled at the President for his stimulus packages which have already created millions of jobs at far less cost. (According to a 2012 report by the independent Congressional Budget Office, the stimulus was responsible for 2 million new jobs in the last three months of 2011).

While the GOP like to call the President a jobs killer, a non-partisan report released in April indicates that Obama has actually created more jobs than his Republican predecessor George W. Bush. This is quite a feat in light of the financial meltdown and ongoing global economic lethargy faced by the Obama administration.

Russia’s War on Ukraine From a Climate Perspective

January 24, 2022, is a day that will live in infamy. This is the day that the Russian Federation led by President Vladimir Putin launched an unprovoked war against the...