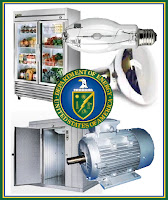 The Department of Energy (DOE) will revise commercial energy efficiency standards for metal halide lamps, commercial refrigeration equipment, walk-in coolers/freezers and electric motors in 2014. This move is expected to lower pollution and save $3.8 billion by 2035.

The specific timetables are as follows:

According to the American Council for an Energy-Efficient Economy (ACEEE), these revisions will cut air, water and climate change pollution while saving businesses and consumers an estimated $156 million per month. The ACEEE estimates that the new energy efficiency standards will reduce climate change causing pollution by 26 million metric tons annually and reduce smog, soot and acid rain.