Renewable Energy on College Campuses in the US 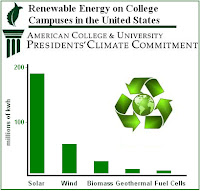 College campuses are major consumers of renewable energy making them a vital part of the sustainability revolution taking hold across the US. They are also national leaders in carbon reduction efforts. College campuses are not only using renewable energy and reducing greenhouse gas emissions, they are also living laboratories that offer a model of sustainability for students, organizations and cities.

One of the leading sustainability initiatives is the American College & University Presidents’ Climate Commitment (ACUPCC). This is an intensive partnership among more than 650 colleges and universities. ACUPCC signatories commit to initiating two or more of seven specified tangible action options to reduce greenhouse gases within the two years after their implementation start date.


According to data co-published by the EPA in late 2012, The ACUPCC is the 3rd largest buyer of renewable energy credits (RECs) in the US. As a group, higher education has reduced carbon emissions by 25 percent over the past five years, more than any US industry.

Sustainable schools help to develop responsible members of society. These campuses offer the leaders of tomorrow an opportunity to see what renewable energy looks like. This is an experience that they will undoubtedly take with them as they transition into the workforce. It will also help to inform their involvement at the the municipal, state, national and global levels.

Inforgraphic – Ranking of the Greenest States in America

Inforgraphic - Ranking of the Greenest States in America