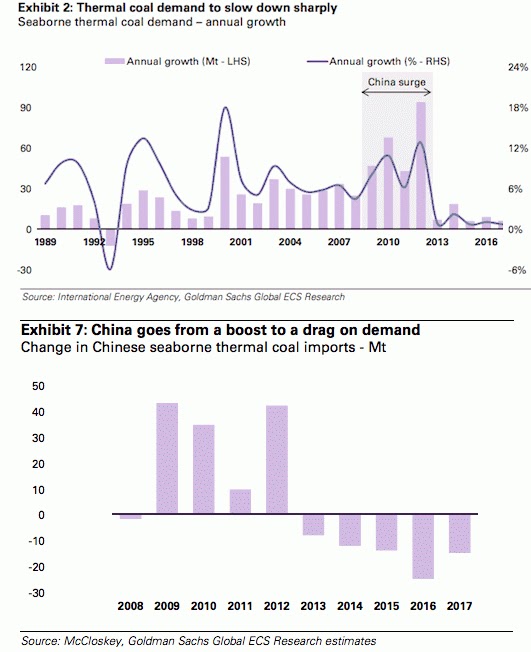 There was a time when investors made a great deal of money from investing in coal, but new research shows that those days are drawing to a close.

As reviewed in a ThinkProgress article by Joe Romm, Goldman Sachs has published a new research paper shows that coal used to generate power is no longer the profitable investment it once was. The tile of the paper says it all, “The window for thermal coal investment is closing.”

As explained in the paper:

“We believe that thermal coal’s current position atop the fuel mix for global power generation will be gradually eroded by the following structural trends: 1) environmental regulations that discourage coal-fired generation, 2) strong competition from gas and renewable energy and 3) improvements in energy efficiency. The prospect of weaker demand growth (we believe seaborne demand could peak in 2020) and seaborne prices near marginal production costs suggest that most thermal coal growth projects will struggle to earn a positive return for their owners.”

The Goldman paper projects a flat future for shipping coal by sea. The waning demand for coal is a global phenomenon. This even includes China where the near-term demand for coal imports is “collapsing.”

Washington state’s Department of Ecology recently said its review of the Gateway Pacific Terminal at Cherry Point, will include “an evaluation and disclosure of greenhouse gas emissions of end-use coal combustion.”

As explained in a Sightline analysis, the burning the 48 million tons of coal proposed for annual export from the terminal would release roughly 100 million tons of carbon dioxide. Efforts to combat climate change through emissions reductions would be utterly undermined if this coal were shipped.

Sustainability in Colleges and Universities Across America