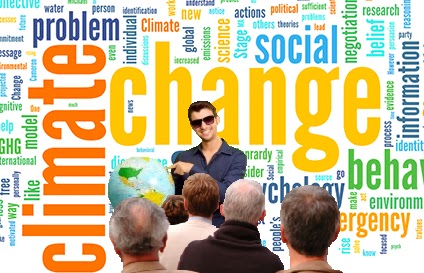 Friends and family are the key to encouraging others to act on global warming. Despite strong scientific support for anthropogenic climate change, only a small number of people are prepared to do something about it.

According to a Yale study published earlier this year, people who are alarmed about global warming are likely to do something about it. Of those that are alarmed, 66 percent have discussed a company’s “irresponsible environmental behavior” at least occasionally with family or friends over the past 12 months. Those that are alarmed are also the most likely to have written letters, emailed, or phoned a government official about global warming in the past 12 months.


The study suggested people would be prepared to act (sign a petition or attend a meeting) if they were asked to do so by someone they “like and respect.” A total of 65 percent of Americans say their own family and friends have the greatest ability to convince them to take action to address global warming. This breaks down as follows: significant other (27 percent), son or daughter (21 percent) or close friend (17 percent).

25 percent Americans discussed a company’s “irresponsible environmental behavior” with friends and/or family in the past 12 months;

It seems that the catalyst causing Americans to talk about global warming is a direct experience with an extreme weather event in the past year. Although they were most likely to talk to others face to face or on the phone, very few leveraged the extraordinary reach of social media.

Surprising almost a quarter of Americans said they would support an organization that engaged in non-violent civil disobedience against corporate or government activities that are deleterious to global warming. Even more surprising is the fact that 13 percent said they would be willing to personally engage in non-violent civil disobedience to combat global warming.

The implications of the study are clear, to get people to act they must be made aware of the dangers. Further, family and friends can influence the behavior of those who are unaware of veracity of global warming.

While the opinions of family and friends can provide an impetus to act on global warming, only a small minority are actually communicating with others on the subject and even fewer are leveraging the power of social media to broaden the discussion.

This study shows that we can influence our friends and family to act.

To find out more about what you can do to combat climate change click here.