by Richard Matthews
in Business and Economics, Leadership, Other, Technology, Transportation
0 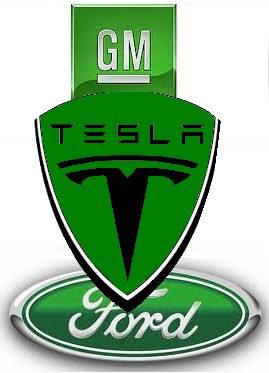 U.S. automakers are producing an ever increasing line-up of more
efficient vehicles. However, efficiency measures in the auto industry
extend beyond the vehicles they produce. American car companies must
compete with more than 36 new hybrid and electric vehicles (EVs) that
have been or will be launched in 2013. Growing demand for highly
efficient vehicles has compelled almost every brand to get into the EV
market, which gives consumers an ever expanding list of vehicles to
choose from.

Automotive brands are increasingly seeing value in greening their operations and products as evidenced by Interbrand’s 2013 Best Global Green Brands ranking,
which counted four automotive brands in the top five spots. The ranking
evaluates companies based on their environmental performance and the
public’s perception of their green credentials.

According to forecasts from Pike research,
more than 210,000 plug-in electric vehicles (PEVs) will be sold
globally in 2013. By the end of 2013, about 400,000 PEVs will be on the
road globally. They further predicted improved battery performance
including greater reliability and charge acceptance from regenerative
braking.

Edmunds.com projected that at least 43 new hybrids, PEVs, EVs,
diesels and fuel cell electric vehicles are planned for introduction in
the U.S. by the 2015 model year.

Aggressive national fuel economy standards for model years 2012 to
2025 have helped push automakers to provide more efficient vehicles.
Declining price points from companies like GM and Nissan
are also a factor driving the rapid adoption of EVs. The growth of
charging station infrastructure is another factor supporting growth.

Just a couple of years after being on the brink of oblivion, GM was awarded the Top Automotive Innovator as ranked by The Patent Board. All together, GM was granted 1,123 U.S. patents in 2011. In July, Environmental Leader
reported that General Motors has partnered with Honda to develop
fuel-cell vehicles and infrastructure. This partnership makes sense
given that the companies are first and second on the Clean Energy Patent Growth Index. When added together, GM and Honda have filed more than 1,200 fuel cell patents between 2002 and 2012.

GM has also garnered a lot of experience with Project Driveway, a
program which was launched in 2007. Through the project, GM has amassed
more than 3 million miles of real-world driving experience with a fleet
of 119 hydrogen-powered vehicles, which is more than any other
automaker.

As reported by Environmental Leader,
General Motors plans to invest more than $331 million to produce more
fuel-efficient engines and transmissions. This includes the Ecotec
engine which offers improved fuel economy, better performance and
reduced carbon dioxide emissions. It also includes an eight-speed
automatic transmission which will assist in improved fuel economy and
performance.

GM’s investments came a month after GM CEO and chairman Dan Akerson
announced the company will save 12 billion gallons of fuel over the life
of the vehicles it builds between 2011 and 2017. The company has also
committed to achieving a 20 percent reduction per vehicle in global CO2
footprint by 2020.

In 2012, Solar Energy Industries Association said that GM uses more solar power than any other automaker in the U.S. The company also ranks No. 13 of the top 20 solar-powered companies in the U.S. In 2011, GM committed to doubling its global solar output to 60 megawatts by 2014, and to increase renewable energy use to 125MW by 2020.

In 2012, GM announced its plan to turn more than half of its
manufacturing plants into landfill-free facilities. With the aim of
helping other companies do the same, GM shared its waste reduction
blueprint called “The Business Case for Zero Waste”.

The automaker recycles 90 percent of its worldwide manufacturing
waste and has 102 landfill-free facilities. On its way to achieving a
zero-waste status, the company has managed to generate billions of
dollars of revenue.

The Volt is GM’s green flagship. This vehicle can operate up to 40
miles on its electrical charge before switching to a gasoline powered
engine. According to the EPA, the Chevy Volt has a rating of 93 MPGe
(MPGe, or miles per gallon Equivalent is a measure of how far the car
can travel electrically on battery energy equivalent to that contained
in 1 gallon of gasoline) while running purely on electricity, and 37 MPG
in so-called “charge-sustaining” mode.  The Volt is the most widely
sold car in its class in the U.S.

In 2013, Ford Motor Co. announced that “eco-consciousness is no
longer a niche value; it’s a way of life.” In 2012, Ford announced plans to cut water use at its European plants
by 30 per cent by 2017, and to send 70 percent less waste to landfills.
In all, it is estimated that Ford will prevent 5.5 billion tons of
waste from being dumped in landfill sites and save 1.3 billion liters of
water.

“This plan represents our pledge to minimize Ford’s
impact on the environment both before and after our customers get behind
the wheel,” said Stephen Odell, the chairman and chief executive of
Ford in Europe. “This goes hand in hand with our commitment to develop
the most fuel-efficient vehicles. Sustainability makes just as much
sense for Ford as a business as it does for the environment.”

According to Interbrand’s 2013 Best Global Green Brands ranking, Ford
Motor Co. came in second. Their Taurus has a 2.0-liter EcoBoost engine
that gets 32 mpg, it’s the vehicle which was EPA  certified as the
best-in-class large sedan for city and highway fuel economy.

In 2012, Ford announced some ambitious plans to increase their EV production capacity.
They said they want to double their battery-testing capabilities by the
end of this year. The company is investing $135 million aimed at
speeding up the development of its next generation of electrified
vehicles by at least 25 percent. Ford says it will reduce the costs of
its hybrid system by 30 percent over previous generations. Their goal is
to triple electrified vehicle production capacity by 2013 and offer
more choices to consumers.

Ford is also getting involved with hydrogen fuel cell vehicles. At the beginning of 2013, the Detroit Free Press reported that Ford had joined Nissan and Daimler to develop affordable fuel cell electric vehicles with the goal of a 2017 launch.

Ford is also behind an innovative program that addresses enegy use.
At the Consumer Electronics Show in Las Vegas, Ford announced the launch
of MyEnergi Lifestyle.
This product helps people to use energy more efficiently, it also
connects plug-in vehicles and energy-smart appliances to the same
database, to produce a measure of overall household energy efficiency.

Another intiative from Ford involves the expansion of its low solvent low VOC, 3-Wet paint process
which the company claims is reducing CO2 emissions between 15 and 25
percent at eight of their plants. By the end of 2013, Ford will have
implemented the technology in 12 plants. The automaker says it will
expand to additional facilities worldwide over the next four years. The
process saves electricity from the blowers that circulate massive
volumes of air through paint booths, and reduces Ford’s use of natural
gas needed to heat the air and ovens.

Ford also reduced the average amount of water used to make each vehicle by 8.5 percent
between 2011 and 2012, putting the company more than halfway toward its
goal of using an average of 4 cubic meters per vehicle globally by
2015.

Tesla Motors is the pioneering California-based electric car company
which is pursuing the goal of accelerating the world’s transition to
sustainable transport with a full range of increasingly affordable
electric cars. Tesla designs and manufactures EVs, as well as EV
powertrain components for partners such as Toyota and Mercedes.

In addition to producing very efficient electric vehicles, a company
press release indicated that the Tesla Model S has achieved unparalleled
safety ratings.  Independent testing by the National Highway Traffic
Safety Administration (NHTSA) has awarded the Tesla Model S a 5-star
safety rating on every subcategory without exception. This is a rare
distinction as only one percent of all cars get an across the board 5
star rating.  The Model S earned an unprecedented new combined record
safety rating of 5.4 stars.

Tesla Motors is an early adopter which has schooled the EV industry
in the U.S. and around the world. In 2006, Tesla was named a recipient
of the Global Green USA Product/Industrial Design Award for its work in developing the Tesla Roadster.

Tesla not only produces great electric vehicles they are also leading the way in charging infrastructure. According to EV New Report, “The Tesla station may become the de facto national energy plan for automobile transportation.”

Tesla has even incorporated a novel approach to sustainability into
their production facilities. Rather than build new facilities, Tesla
Motors motors have refurbished older factories. Overall, Tesla is widely
recognized for its excellent industry leading sustainability strategy.

The future of transportation is electric

According to Elon Musk,  the CEO of both Tesla Motors and SpaceX, as
well as the Chairman of SolarCity, all forms of transportation are going
to be electric.

“The way I see it is that all transportation will go
electric except for rockets, ironically. All that is needed is someone
to provide compelling electric vehicles. That is something we’re doing
at Tesla and that’s something I think we’ll see the rest of the auto
industry doing over time. I don’t think there is such a thing as the
electric vehicle market and the internal combustion market — it’ll all
go electric. It’s just a question of producing a compelling product.”

Efficiency is driving the market for this new generation of vehicles
which are far more efficient than gasoline and diesel power.  Advances
in electric and hydrogen vehicles are ushering in a new era that will
bring an end to the environmentally destructive internal combustion
engine.

More sustainable practices, collaboration, technology and a new
generation of vehicles are reducing the footprint of the automotive
industry.

Highly efficient electric and hydrogen vehicles are combining with
sustainable automotive initiatives to forge a clean and green future in
the U.S. and around the world.

The World’s Aquifers are Being Tapped Unsustainably

In September 2021, Patagonia was recognized as the world’s most responsible company and in September 2022, the sustainability juggernaut took its support for the planet to a whole new level by donating...

What are the different economic systems and what is a sustainable economy? These are important questions that need to be asked in light of the fact that the prevailing economic...

The World’s Aquifers are Being Tapped Unsustainably