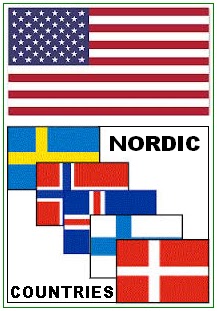 A recent statement from the US and Nordic countries (Denmark, Finland, Iceland, Norway, and Sweden) reaffirms their “deep partnership based on shared fundamental values” and pledged to “deepen their collaboration on important shared global priorities, including climate change, clean energy, [and] the Arctic.” They further agreed to take concrete steps to achieve those goals.

According to the statement:


“Climate change is one of the foremost challenges for our future economic growth and well-being. We underscore the importance of continuing to encourage innovative approaches to promoting energy efficiency and clean energy, including renewables, and of taking action on climate change, domestically and internationally. This requires mobilizing scaled up climate finance. We agreed on the importance of reaching an ambitious, comprehensive, fair, and inclusive climate agreement under the United Nations Framework Convention on Climate Change in 2015 that is consistent with science, mindful of the two degree target, and applicable to all.”

Other joint efforts by the US and Nordic countries include the 21st Century Power Partnership, which “brings together government and private sector actors to help identify and promote successful technical, policy, and financial pathways to cleaner and more efficient power systems in both developed and developing countries.” These nations expressed their support for the Sustainable Energy for All, an initiative of the UN Secretary-General. They also articulated their support for Open Government Partnership, a multilateral initiative that asks governments to promote transparency, empower citizens, fight corruption, and strengthen governance.

“Working together, we have a historic opportunity to make progress on issues of global significance, and we remain steadfast in our dedication to the pursuit of these goals.”