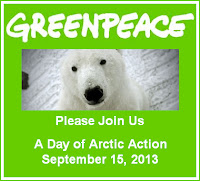 The Arctic is a precious and fragile ecosystem that regulates the climate of the entire planet. Sadly it is under siege from melting polar ice caps due to global warming and a growing invasion of companies seeking to exploit its fossil fuel reserves and mineral deposits.

To date there 36 countries participating, 106 events and over 14,000 people all trying to help raise awareness about the need to protect the Arctic from companies like Shell.


Now we need your help. You do not need to scale a skyscraper or trek to the North Pole, all you need to do is join the three and a half million people who have signed up to Save the Arctic. Please consider adding your name to those who value the Arctic eco-system.

September is an important month for the Arctic as this is the month where the ice sheet is at its lowest level. On September 15th, 2013, Greenpeace Canada is encouraging people to come together for a Day of Arctic Action.

Together we can protect the Arctic from irresponsible efforts to plunder this regions natural resources. Click here to show your support for the Arctic

Better still become an Arctic Ambassador and get your community to sign the petition. Whether you go door to door or set up a booth in the park or simply ask collegues, classmates family, and friends, get involved in one of the most important issues of our age.

Click here to read more details on the Arctic Ambassador Petition Challenge. Petitions will be accepted until Thursday September 19, 2013!

Related Articles
Video – Ice Ride: the global bike ride to defend the Arctic. Are you in?
Ice Ride: Critical Mass for the Arctic