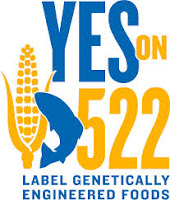 at the Baltimore Convention Center, Room 319. Washington State’s I-522, the Federal Just Label It effort and Lessons Learned
from California’s Prop. 37 GMO labeling advocates are rallying to support
Yes on 522, the People’s Right to Know Genetically Engineered Food Act, in
Washington State.

Washington’s I-522 is the only GMO labeling bill heading to
voters this fall, and is a critical front in the battle to label genetically
engineered foods.

Learn how I-522 can withstand opposition from big biotech and the junk food
industry, which considers the I-522 GMO labeling bill a serious threat and has
already raised more than $11 million to defeat it.

Also, hear from leaders about lessons learned from California’s Prop. 37 and
what’s happening on a federal level to require labeling of genetically
engineered foods.

For more information and to contribute to the Yes on 522 Campaign to label
GMO foods, contact Steve Hoffman, steve@compassnatural.com, tel 303.807.1042.

Banks are Backing Away from Fossil Fuels and Embracing Sustainability

Major banks have been slow to act but it appears as thought they are moving away from dirty energy. Big...