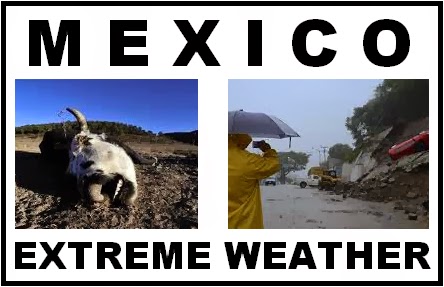 Extreme weather in the form of torrential downpours and drought are a very serious and growing problem in Mexico. This summer the country suffered from some of the worst droughts on record and now Mexico is being ravaged by hurricanes and heavy rains.

Hurricane Manuel and hurricane Ingrid slammed into Mexico this week. This was the first time in more than 50 years that two tropical storms or hurricanes had hit both of Mexico’s coasts within 24 hours. Manuel hit Mexico’s Pacific coast and Hurricane Ingrid struck on the country’s Atlantic coast. They have caused flooding which is being blamed for more than 100 deaths. Another 58 people are missing and probably dead in a landslide that hit La Pintada, several hours north of Acapulco.


Hurricane Manuel made landfall in the Mexican state of Sinaloa almost due east of the tip of the Baja Peninsula on Thursday September 19, at 8 am EDT, as a Category 1 storm with 75 mph winds. It was Manuel’s second landfall this week in Mexico.

Manuel first hit the coast on Monday September 16 as a tropical storm with 70 mph winds northwest of Acapulco, bringing torrential rains of up to one foot in the coastal mountains. Acapulco received 7.41″ of rain from Manuel between September 12 – 16. Manuel promises to bring 5 – 10″ of additional rain to the Mexican state of Sinaloa.

This spate of hurricanes and storms is not the only extreme weather that is savaging Mexico. The nation has was also plagued by one of the worst droughts on record in the summer of 2013. Eighteen of the country’s 32 states were affected.

Chihuahua has produced crops and cattle for generations, but not anymore. Prior to this week it has not rained at all in Chihuahua in 2013. Scientists have drawn a causal link between climate change and drought in Mexico.

“Parts of northern Mexico are now in permanent drought. In other words, the climate has already changed,” says Carlos Gay, an atmospheric physicist and head of the climate change programme at Latin America’s largest university, Mexico City’s UNAM. “There is no doubt that this drought is the result of climate change. When you look at a single event, you cannot say so, but when you look at the bigger pattern it becomes very clear.”

Widespread famine forced regional and federal governments to provide approximately 60,000 families with food aid in the state. The situation is so bad that the UN’s Development Programme said that the state has a lower human development index than Niger, the world’s poorest nation.

Farmers are increasingly being forced to rely on unsustainable pumping of water from the state’s 61 aquifers, to irrigate their crops. As more water is being taken out of these aquifers, the water table is getting harder to access and farmers must dig deeper.

The cost of climate change is massive. The federal government has calculated the cost of constructing additional water infrastructure to cope with drier conditions brought on by climate change at 246bn pesos.
In Chihuahua, an estimated 350,000 cows have died in the past year, costing ranchers around 2.4bn pesos.

Faced with the crippling effects of climate change Mexico has become only the second country, after the UK, to set itself legally-binding carbon emissions targets. Mexican legislators have agreed to shrink the nation’s carbon footprint by 30 per cent by 2020 compared with business-as-usual.