The Vital Role of Forests: Carbon, Rain and Food 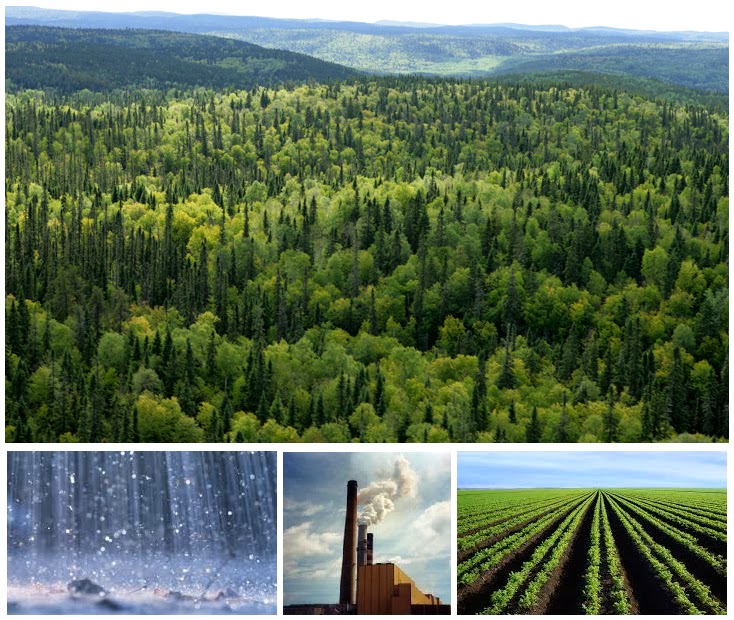 We are coming to a better understanding of the vital role that forests play in
the general health of planetary ecosystems.  However, alongside our burgeoning
awareness, we are also destroying forests in our quest for more land and
lumber.

Deforestation is eliminating the Earth’s forests on a massive scale. Each day
at least 80,000 acres (32,300 ha) of
forest disappear and another 80,000 acres (32,300 ha) of forest are degraded.
Overall, FAO estimates that 10.4 million hectares of tropical forest were
permanently destroyed each year in the period from 2000 to 2005. About an acre of tropical rainforests are lost every
second. If the current trend continues, the world’s rainforests could
completely vanish in a hundred years.

Forests are being destroyed largely for agricultural purposes and logging.
Forests are also cut down as a result of growing urban sprawl. Deforestation
results in habitat loss for millions of species that depend on them for their
survival. Deforestation undermines the water cycle which can lead to
desertification.
Deforestation also drives climate change as trees play a critical role in
absorbing or sequestering the greenhouse gases that fuel global warming. The
clearing and burning of rainforests are responsible for approximately 15 percent
of global carbon emissions. In the U.S., forests absorb 13 percent of total greenhouse
gas emissions each year. Based on the most recent satellite data, emissions from
deforestation account for 10 percent of global carbon
emissions. However, a January 2013 study just out of
Dartmouth College shows that deforestation impacts on soil and may release even
more carbon than previously thought.

Wealthy countries have promised to help poorer nations to protect their
forests through programs like The Natural Capital Project, The Economics of
Ecosystems and Biodiversity (TEEB) and The Partnership for Wealth Accounting and
the Valuation of Ecosystem services (WAVES). While the developed world has
pledged more than 5 billion dollars for this purpose, the money promised has not
lived up to these promises.

One recent example involves the country of Ecuador, which has started
cutting down its forests for oil drilling operations after the international
community failed to provide necessary funding. Conversely, Costa Rica is one of
the best examples of successful forest management. The country has managed to
double the size of its tropical forests in the last 20 years through national
conservation policies. As reported in Environmental Research Letters, Costa
Rica’s ban on clearing of mature forests appears to be a key success factor in
encouraging agricultural expansion on non-forest lands.

Success in managing forests requires a sound economic plan in support of
conservation. There are a number of steps governments can take to help with
reduce deforestation including tax breaks, direct payments, and subsidies.

Water and hydro-electric companies can also charge customers through fees
embedded in utility bills in order to generate income to pay forest managers.
Governments can also legislate financial mechanisms that value natural resources
like trees. Under such a scheme, companies are forced to pay for the pollution
they generate.

Setting a mandatory carbon price may be the best way to protect forests as
market driven programs seem to offer the best approach. Another approach
involves projects like the Forest Footprint Disclosure (FFD) which is working
with companies on their impact on forests. Initiated in 2008, this is a
not-for-profit project of the Global Canopy Foundation that is backed by
investors.

A more workable solution is to carefully manage forest resources by
eliminating clear-cutting to make sure that forest environments remain intact.
The cutting that does occur should be balanced by the planting of enough young
trees to replace the older ones felled in any given forest. The number of new
tree plantations is growing each year, but their total still equals a tiny
fraction of the Earth’s forested land.

International efforts to curb deforestation are centered on a United
Nations-backed scheme called Reducing Emissions from Deforestation and Forest
Degradation (REDD). REDD+, emerged from the 2009 climate talks in Copenhagen,
was developed to provide financial incentives to countries and landowners to
protect and better manage forests.

Forests are not a renewable source of electricity

One of the most troubling trends involves the use of forests as fodder for
energy production. To meet this growing demand, U.S. companies have become the
world’s largest exporter of wood pellets in 2012. What makes this even worse is
that this is being sold as a renewable form of energy production.

As explored by the NRDC, burning our forests is bad for our climate, bad for local ecosystems, and bad
for our communities.  In response to this troubling trend, the NRDC and
Dogwood Alliance launched a program to protect Southern trees called Our Forests Aren’t Fuel. This campaign is
designed to raise awareness about the alarming and rapidly-growing practice of
logging forests and burning the trees as fuel to generate electricity.

Supporting reforestration to offset carbon emissions is increasingly popular.
This is done through the purchase of carbon credits that are linked with the
forestry sector with the idea that these new trees will sequester carbon from
the atmosphere.

As reviewed in Ecologist, a report by the
monitoring and analysis agency Ecosystem Marketplace indicates that over 30
million metric tonnes of carbon dioxide equivalent (CO2e) was contracted across
forest markets in 2010.

Carbon forests can offer a variety of benefits for the environment, however,
there is considerable doubt as to whether these planted forests enhance
biodiversity. There is also growing support for research that suggests that
planted forests may not be as effective as natural forests in inducing rainfall.

Forests are essential to rain

While the relationship between forests and carbon has received a lot of
attention, research suggests that forests may also be the driving force behind
precipitation which is so vital to overall ecosystem health. As explored in an
article in Mongabay, forests may be the
key to rainfall and as a consequence, global ecological restoration.

On September 12, 2013, the U.S. Forest Service published a final rule that is expected
to improve the agency’s ability to restore land. “This rule will help us improve
the resiliency, health and diversity of our forests and grasslands,” said U.S.
Forest Service Chief Tom Tidwell. “We will now be able to move forward with our
partners to focus more energy on action, and less on paperwork, to restore more
acres in less time.”

The final rule includes reference to a paper titled “Where do winds come from?”
This paper outlines a new meteorological hypothesis in which condensation, not
temperature, drives winds. This paper highlights the importance of the world’s
forests as the salient driver of precipitation from the coast into a continent’s
interior. The theory, known as the biotic pump, was first developed in 2006 by
two Russian scientists

This research explains why deforestation also brings a drop in precipitation.
The condensation produced by forests creates zones of low pressure that suck in
the air from the surrounding regions. Forests create persistent low pressure
zones on land and this causes moist winds to blow from the ocean to land.
The theory put forth in this paper explains why there is so little rain in
deserts and further posits that if we were to plant enough trees in these zones
we could induce rainfall.

The paper’s authors, Victor orshkov and Anastassia
Makarieva, explain that, “Preserving and recovering forest cover may prove
to be the cheapest and most reliable means of ensuring regional environmental
sustainability.” They also indicate that their research on biotic pumps suggests
that industrial plantations do not move rain as effectively as natural
forests.

One of the chief findings in this research involves the relationship between
forests and agriculture. Put simply, the more forests we lose, the less rain
will reach continental interiors.

The relationship between forests and agriculture was also addressed in May at
the International Conference on Forests for Food Security and Nutrition. At this
conference, scientists and leaders from around the world largely agreed that forests are essenatial to
sustainable food supplies. They concluded that forests contribute to food
security including the provision of ecosystem services like the regulation of
water flow, and the protection of soils against erosion.

The relationship between forests and agriculture is a tragically ironic
vicious cycle. We destroy forests to make more room for agriculture, while
deforestation appears to undermine agricultural productivity.  We then need more
land to produce crops to make up for the reduced productivity.

The issues associated with food supplies will become even more important as
we strive to meet the challenge of feeding an ever expanding population. A
growing body of research indicates that forests are essential to agricultural
productivity.

Forests are far more than an important source of carbon sequestration, they
are essential to the water and food on which all life depends.