Republicans Shut Down Government Again Impacting the Economy and the Environment 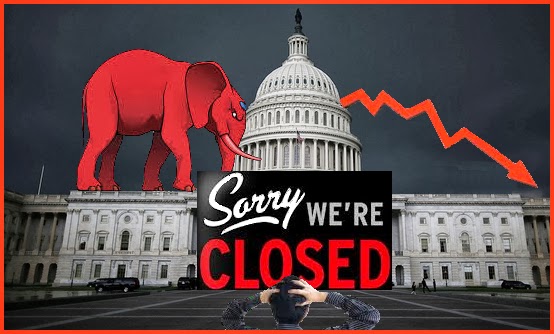 As of midnight last night the fiscal year expired and the US government began shutting down. House Republicans are being intransigent and their attempt to tie the budget to Obamacare amounts to extortion. Led by the Tea Party extremists, the GOP has been steadfast in their refusal to pass the 2014 federal budget by the end of the fiscal year. Republicans are trying to derail the implementation of health care reform, even though US lawmakers voted for it in 2010 and the American people expressed their support when given the choice in 2012.

As explained by President Obama:

“One faction in one branch of government doesn’t get to shut down the entire government just to refight the results of an election.”

As a consequence of the GOP’s malfeasance, on the morning of October 1, 2013, 800,000 workers, or about 40 percent of the government’s civilian work force, were furloughed and another one million federal employees have been asked to work without pay.
This will last until Republicans agree to pass a budget,

As President Obama tweeted, “They actually did it. A group of Republicans in the House just forced a government shutdown over Obamacare instead of passing a real budget.”

Republicans have systematically undermined the American economy. The government shutdown will likely create a lot of volatility in financial markets as it did in 2011. The GOP’s latest bid to stymie government comes during a week in which investors are already skittish about the meeting of the Federal Reserve.

This was not the first time Republicans have used their budgetary control for nefarious purposes. The GOP has a long history of obstructionism over the budget. In 1995, Congressional Republicans wielded their power against the Clinton administration and managed to shut down government for 21 days.

This is not merely political grandstanding on the part of Republicans, their irresponsible conduct will have severe consequences. In addition to impacting government agencies specializing in science, technology and health the government shutdown will directly impact the Environmental Protection Agency (EPA).

There are about 16,200 people that work for the EPA almost all of which will be furloughed. As explained by EPA head Gina McCarthy a few days ago, a furlough means that her agency “effectively shuts down.”

Almost half of the US Department of Health and Human Services’ 78,686 staff employees are being told to stay home during the shutdown this includes employees from the Food and Drug Administration and the National Institutes of Health.

This is but the first salvo in the GOP’s latest war on government. House Republicans can be expected to continue to resist efforts to fund government especially when it comes to the forthcoming battle over the debt ceiling.

One of the most egregious impacts of the EPA shutdown is that it will delay the organization’s efforts to reign-in carbon pollution from power plants.

Republicans are making it clear that they intend to use their control over the nation’s purse strings to serve partisan politics. However a Washington Post ABC News poll shows that only one in four Americans approve of the GOP’s tactics. Those who are holding Americans hostage don’t seem to remember how the Democrats gained seats in the 1998 midterms after the Republican’s shutdown government.

The Science in the 2013 IPCC Report: Unequivocal Evidence of Anthropogenic Climate Change

The Science in the 2013 IPCC Report: Unequivocal Evidence of Anthropogenic Climate Change