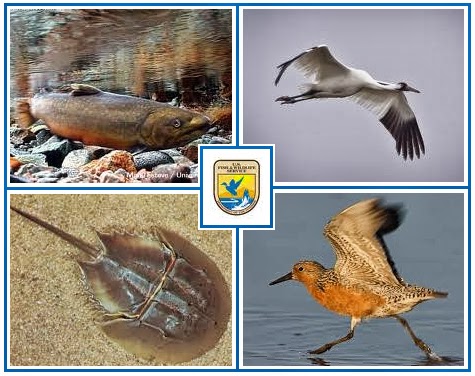 According to Michelle, a writer who works for the US Fish and Wildlife Services, the government shutdown is having deleterious impacts on America’s natural resources. The Department of Interior is no longer overseeing the complex web of ecosystems and habitats. America’s National parks are
not being cared for, habitats are being harmed and threatened species
are at risk.

As Michelle explains, the biologists, civil engineers, educators, and regulators that are employed by the United States Fish and Wildlife Service are being prevented from doing their work protecting a vast number of species and habitats. This group is already being forced to work overtime to manage staff reductions as a consequence of the sequester earlier this year. Now they are being furloughed while they wait for Republicans to come to their senses. Sadly, it might be a very long wait.


The mandate of the National Wildlife Refuge System is to protect and preserve endangered habitats, ecosystems, plants and wildlife. As a consequence of the government shutdown they are no longer able to do their jobs and provide desperately needed protections.

“These lands are vital to the health of our planet,” Michelle said. “They provide refuge for the millions of migratory birds that are now making their arduous and treacherous voyage across the Northern Hemisphere and into Central America. We are obligated by a Migratory Bird Treaty Act to do everything in our power to protect these defenseless animals. Yet we are not funding these refuges.”

Michelle worries that as hunting season approaches no one is on the ground to ensure that game populations are both managed and protected. She is also concerned about the fate of sensitive wetlands and outbreaks of wildfires. She further worries that some fragile species like the red knot,  the bull trout, the whooping crane and the horseshoe crab, will be at even greater risk.

“[O]ur threatened and endangered species are in greater peril as every day goes by. The system that we have in place is already hard-pressed to maintain the deadlines established by the Endangered Species Act. It is uncertain whether the courts will see the government shutdown as a viable excuse for violating the timelines provided by the Act. Regardless, any delay in implementation will have untold implications for an endangered species.”

She concludes by making an impassioned plea to get Congress to act in the national interest and end this destructive shutdown.

“We the American people have entrusted our government with a broad range of responsibilities. Representatives, Senators: you have breached the faith. I implore you, whatever your political differences, uphold the trust of the American people. Preserve those resources that we have placed in your care. And as you continue the debate, please remember, all that is lost cannot be recovered.”

Non-Profit Groups and Scientists React to the Fifth IPCC Report