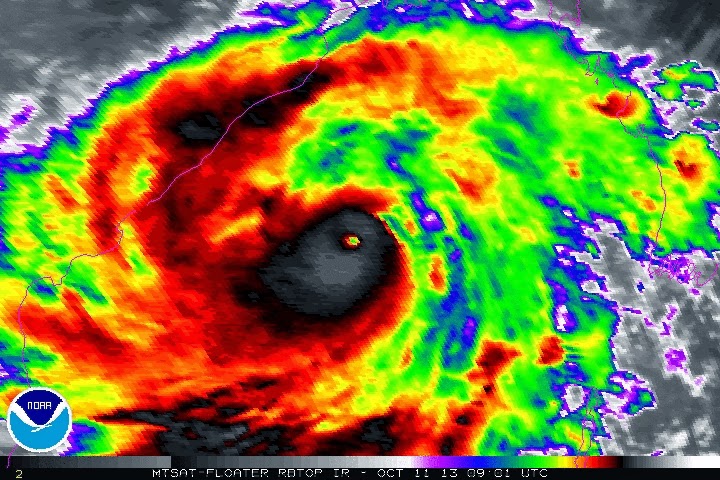 Cyclone Phailin is officially the strongest storm ever measured in the Indian Ocean and strengthened at one of the fastest rates ever recorded, going from a tropical storm to a category 4 cyclone in only 24 hours.

The speed at which Phailin intensified is known as Rapid deepening or rapid intensification. This is a meteorological condition that occurs when the minimum sea-level atmospheric pressure of a tropical cyclone decreases drastically in a short period of time. The National Weather Service describes rapid deepening as a decrease of 42 millibars in less than 24 hours.

Phailin was the equivalent of a category 5 hurricane with sustained
winds of 160 mph (260 kph) and it covered an area larger than France.

Although Cyclone Phailin was the strongest to hit India in more than a decade, its path of destruction did not cause the widespread loss of life that many had feared. This is largely due to the evacuation of more than one million people, the largest evacuation in India’s history.

The biggest disaster relief operation ever in the country’s reduced the death toll, however, there was widespread devastation to more than half a million hectares of agricultural land. In Ganjam district alone approximately 1 million tonnes of rice crops were devastated. Property damage was also widespread including the destruction of hundreds of thousands of houses. Officials remain concerned about access to potable water and disease outbreaks from the flooding.

As the storm came ashore, people in India and Bangladesh braced for yet more rain in an area already impacted by an overly active monsoon season. Storms typically lose much of their force when they hit land, where there is less heat-trapping moisture feeding energy into the storm. However torrential rains and strong winds were still being reported on Sunday.

At its height waves of up to 17 meters (56 feet) buffeting the Bay of Bengal. The predicted storm surge was between 3-9 metres. Late Friday, before the storm made landfall a surge gauge on the Indian coastline was already approaching 1 meter. The actual maximum height of the storm surge is not clear at this time.

With some of the world’s warmest waters, the Indian Ocean is considered a cyclone hot spot, and some of the deadliest storms in recent history have come through the Bay of Bengal, including a 1999 cyclone that also hit Orissa and killed 10,000 people.

Such super storms are likely to become a much more common occurrence as the planet continues to get hotter. India’s disaster relief operations serve as a model that saved countless lives.