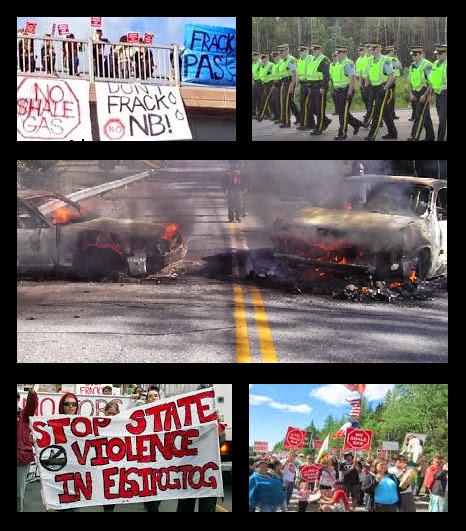 On Monday, October 21, a judge in Moncton, New Brunswick, lifted an injunction that prevented the people of the Elsipogtog First Nation from protesting against shale gas exploration in the province. The protesters want SWN Resources to stop seismic testing and leave. In a written statement, the Assembly of First Nations Chiefs called for the provincial government to suspend the permits granted to SWN Resources.

On October 17, in response to a court injunction, the RCMP cleared the protest roadblocks on Route 134 by force. Six police vehicles were burned and police fired beanbag type bullets and doused protestors with pepper spray. Many have criticized the police for causing the protest to spiral out of control.


Community chief Aaron Sock said that every effort will be made to keep its opposition peaceful after 40 people were arrested and weapons seized when the Mounties enforced a court-ordered injunction “Criminal behaviour of some individuals in recent days is not representative of the greater First Nations community, ” Sock said.

Sock went on to say that he expects to meet later this week with New Brunswick Premier David Alward, who supports fracking in the province. In the interim a small group of people vow to continue their peaceful protest on Route 134.

New Study Shows Natural Gas Worse than Coal
Natural Gas is not Clean Energy
Whats the Fracking Problem
Video – Sandra Steingraber Shines a Spotlight on the Problems of Fracking
Fracking: A Tragic Waste of Water Resources
Infographic – How Much Water Does Fracking Consume
The US Environmental Protection Agency and Fracking
The Implications of the US being a Global Leader in Fossil Fuel Production

Fisker May be Saved by Hong Kong Tycoon’s Investor Group