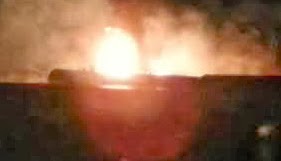 On Saturday October 19, at around 1 a.m. local time, a CN train including 9 cars carrying liquid petroleum gas and 4 cars transporting crude oil derailed near Gainford, in Parkland County. This small community is located 80 kilometers west of Edmonton, Alberta. The derailment caused a massive explosion and fire. After trying to battle the blaze firefighters withdrew to let the fire burn itself out.


About 100 Local residents were evacuated and it could be up to 72 hours before evacuated residents would be allowed to return home. The highway near Gainford was closed. At about 9 a.m., a second explosion occurred. At the present time there are no reports of injuries to people or livestock and no damage to homes.

In 2005, Parkland County saw another train derailment in which more than 40 cars of a CN Rail train spilled 800,000 litres of bunker oil and wood preservative into Wabamun Lake.