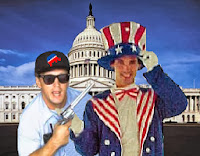 Republicans held America hostage for 16 days and undermined efforts to protect America’s air, water, food and natural resources.  They unsuccessfully sought to extort a ransom in the form a number of anti-environment riders.

This circus would be comical if the impacts were not so serious. Only at the eleventh hour was legislation passed that enabled the government to reopen and avert a debt default. However, these are temporary fixes and the same issues will have to be dealt with again early in 2014.

This sad state of affairs is a testimony to the GOP’s rabid resistance to the federal government’s environmental efforts. While the latest round of obstructionism centered on the Affordable Care Act (aka Obamacare), Tea Party conservatives were previously at the forefront of a successful initiative that killed cap-and-trade legislation (which could have significantly advanced American efforts to combat climate change).

House Republicans are a vociferous group of anti-environment climate deniers. They tried to enact a long list of environmentally destructive provisions in their bid to hold America hostage over the continuing resolution and the debt ceiling.

They attempted to attach destructive riders like approval for the Keystone XL tar sands pipeline and more offshore drilling. They would have also liked to subvert the federal government’s regulatory powers by requiring House approval on all new environmental regulations.

Although their efforts to attach such provisions failed, the shutdown took its toll. Here is a summary of some of the ways in which the shutdown adversely impacted Americans:

– EPA: The cleanup of toxic cancer causing chemicals at many of the 800 contaminated federal Superfund sites ceased during the shutdown and EPA efforts to relocate people due to toxic contamination was suspended during the shutdown.
With 94 percent of its staff furloughed, the EPA was unable to pursue
additional environmental safeguards, and the agency could not monitor
and protect America’s air and water. Permits could not be issued and
adherence to environmental laws could not be enforced.

– Fish and Wildlife: Protection of America’s wildlife and natural resources were significantly downgraded as many biologists, civil engineers, educators, and regulators that are employed by the United States Fish and Wildlife Service were furloughed during the shutdown.

– NRC: The nations nuclear power production sites were not under the same level of supervision from the Nuclear Regulatory Commission (NRC), which had sent more than 90 percent of its 3,900 workers home. This impacted everything from emergency preparedness exercises to safety upgrades and routine inspections of nuclear materials and waste licensees.

– CDC: Due to furloughs at the national foodborne detection services of the
Centers for Disease Control and Prevention (CDC), the government did not
have the manpower to adequately follow up on a major salmonella
outbreak that impacted hundreds of people in 18 states.

– National Parks Service: National parks and wildlife refuges
were closed to the public preventing them from getting close to nature
and depriving parks and local communities of important sources of
income.

The Republican’s tenacious opposition to sane governance
should not be forgotten as it very well might happen again if people
like Texas
Senator Ted Cruz have their way.

The price tag for the shutdown is pegged at 24 billion, and this tally does not quantify the environmental impacts. If this cycle of uncertainty is once again
perpetrated against the American people in the new year, the costs will be even higher.

24 Hours of Reality: The Cost of Carbon Online Event

24 Hours of Reality: The Cost of Carbon Online Event