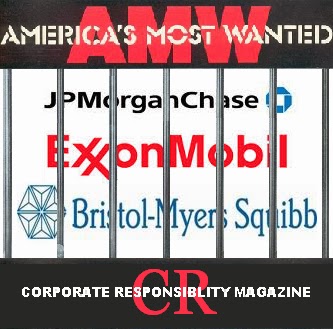 The first three selections on their list are understandable. Accenture won top honors in the Business Services sector, Mattel earned the number one spot in Consumer Items and Campbell Soup was recognized as the leader in Consumer Staples.

The wheels come off the proverbial cart when we get to their number one picks for energy, Financials/Insurance/Real Estate, and Healthcare sectors.


Somehow CR Magazine deemed Exxon Mobil, a newcomer on the list, as deserving of being the best company in the Energy sector. Exxon Mobil is a highly questionable choice, even if we ignore the fact that they are in the fossil fuel business which is the primary cause of climate change.

ExxonMobil subsidiary XTO Energy is being prosecuted for alleged environmental crimes after it spilled fracking wastewater into a Pennsylvania river in 2010. The company has already agreed to pay a $100,000 federal fine for spilling 57,000 gallons of contaminated fluids into a tributary of the Susquehanna River.

XTO’s bizarre response only magnifies their subterfuge. “Charging XTO under these circumstances could discourage good environmental practices, such as recycling,” XTO said in a statement responding to the charges. “Criminalizing a small recycling spill sends the wrong environmental and legal message,” the company said. “The action tells oil and gas operators that setting up infrastructure to recycle produced water exposes them to the risk of significant legal and financial penalties should a small release occur.”

ExxonMobil was also fined $120,000 by the California Air Resources Board (ARB) for violating the state’s mandatory greenhouse gas reporting rule. (In California companies are obliged to report their GHG emissions annually).

Things go from bad to worse when it comes to the Financials/Insurance/Real Estate sectors. JP Morgan Chase Bank was awarded top honors despite the fact that CR gave the company a “yellow card” for its discontinued practice of posting transactions that generated overdraft fees. A practice for which the company paid $110 million settlement in a class actions suit. However, this is the least of their crimes.

JP Morgan played a role in the collapse of the US real estate market and subsequent global economic meltdown of 2008. Recently, the company was forced to pay a record $13 billion and plead guilty to a criminal charge to settle a Justice Department investigation into the bank’s sales of mortgage bonds.

CR Magazine’s decision to name Bristol-Myers Squibb (BMS) as the top firm in Healthcare is another questionable choice. In October of this year Robert Ramnarine, a former high level executive (1997 to 2012), was sentenced to prison for securities fraud.