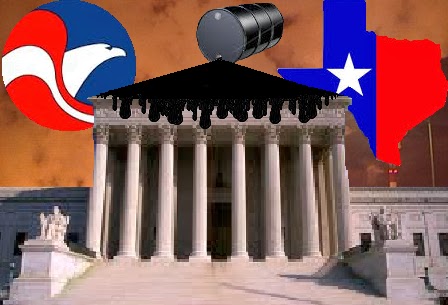 This is in response to six separate petitions for ‎certiorari (a writ or order by which a higher court reviews a case tried in a lower court). The litigation is titled Coalition for Responsible ‎Regulation, Inc. et
al., v. Environmental Protection Agency (D.C. Cir. Index No. 09-1322). Those who filed the petitions are putting the interests of the old energy economy ahead of efforts to combat climate change. They include the State of Texas, the US Chamber of Commerce, and predictably industry associations ‎of energy producers and users.‎


These challenges arise from a decision of the Federal Circuit Court for the District of Columbia which upheld ‎EPA’s efforts to regulate GHGs under the CAA.

The Supreme Court will review the question: “Whether EPA permissibly determined that its ‎regulation of greenhouse gas emissions from new motor vehicles triggered permitting ‎requirements under the Clean Air Act for stationary sources that emit greenhouse gases.”

In an order issued on October 30, 2013, the court told the six petitioners in the consolidated case to keep their legal briefs to 45,000 words total. This represents a substantial reduction from nine separate briefs of 15,000 words each, or 135,000 words total.

Among the EPA efforts that are threatened by this review are GHG emission limits for light-duty vehicles (tailpipe ‎rule) and large, stationary sources (timing and tailoring rules).

In 2007 the Supreme Court ruled that EPA has the authority to regulate GHG emissions ‎‎(Massachusetts v. EPA). However the recent Supreme Court decision to review the D.C. Circuit Court’s ruling is a win for the brown economy and those opposed to GHG regulation.

The Supreme Court decision is at odds with US public opinion as a Hart Research Poll indicates that 74 percent of voters support EPA’s proposals to limit power plant emissions. That support cuts across states that supported Barack Obama (73 percent) and Mitt Romney (73 percent) as well as party identification (Democrats 92 percent, independents 72 percent, and Republicans 58 percent).

The court has not scheduled arguments yet, but they are likely to take place in February.

Green IT Investment, Regulation and Legislation

Petition to Avoid a Repeat of Hurricane Sandy

Petition to Avoid a Repeat of Hurricane Sandy