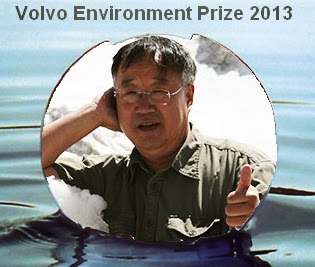 The Chinese glaciologist and climate scientist Dr. Qin Dahe has been awarded the 2013 Volvo Environment Prize. Dr Qin Dahe was recognized for his elucidation of the connection between the increasing frequency of extreme weather and climate change over the last 50 years including droughts, heat waves, torrential storms and rain.

Previously the head of the China Meteorological Administration, Dr Qin Dahe is a glaciologist at the Cold and Arid Regions Environment and Engineering Institute in Lanzhou, China, and Co-chair of Working Group 1, IPCC. Qin Dahe is one of the key contributors to the IPCCs fifth assessment report released in September, 2013. He wrote the opening section on the “Physical Science Basis”. His research demonstrates the relationship between climate change and extreme weather events. Dr. Qin has published more than 170 scientific articles in English and 230 in Mandarin.


In addition to his work on extreme weather, Dr Qin is also a leading expert on the Asian cryosphere, one of the main components of the Earth’s climate system, (comprising snow, river and lake ice sea ice, glaciers, ice shelves, and frozen ground). The cryosphere has important implications for the Earth’s climate system including water resources and ecosystems for more than two billion people in Asia.

Dr Qin hopes that science will encourage action from member countries at global climate negotiations. “There is an encouragingly fast development in climate models. We are now seeing much smaller discrepancies between prognoses and what we observe in the form of temperatures and carbon dioxide concentration. My hope is that the scientific evidence will prompt people all over the world to work together to reduce emissions,” says Dr Qin.

The Volvo Environment Prize was founded in 1988 and has become one of the world’s most prestigious environmental prizes. It is awarded annually to people who have made outstanding scientific discoveries within the area of the environment and sustainable development. The prize consists of a diploma, a glass sculpture and a cash sum of SEK 1.5 million and is presented at a ceremony in Stockholm on 26 November 2013.

The 2012 recipient was Gretchen Daily, professor of environmental science at Stanford University in Palo Alto, Ca. She is one of the world’s leading scientists and researchers on ecosystem services, biogeography and the future dynamics of biodiversity change. She co-founded the National Capital Project, which is focused on aligning economic factors and processes with conservation.