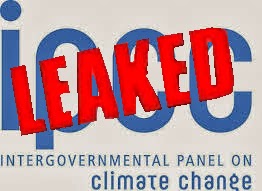 Although it is not scheduled to be published until March 2014, another installment of the Intergovernmental Panel on Climate Change (IPCC) report has been recently leaked. This second quarter of the fifth assessment deals with the severity of climate impacts and worldwide efforts to adapt to it.

The report indicates that in a world wracked by climate change we can expect significant problems in the food chain, conflict and widespread extinction of species. The leaked document also suggests that polar ecosystems and coral reefs will be hit hard by ocean acidification.


In addition to deaths and illnesses caused by heat waves, climate change is expected to exacerbate social tensions and lead to wars between nations. “[C]hanges in sea ice, shared water resources, and migration of fish stocks, have the potential to increase rivalry among states,” the report says.

This is a view that was explored in great detail in an early August article. The report predicts widespread food shortages as ocean and land ecosystems collapse. Rising food demand and declining agricultural yields (2 percent each decade for the rest of the century) will lead to mass starvation, particularly among the poor in Asia.

Agricultural disruptions will be caused by heat waves, drought and flooding. Their will be salient risks in low-lying coastal zones, with “severe harm” risks of flooding in cities as hundreds of millions of people will be driven from their homes by the end of the century.

Despite the apocalyptic future predicted, there are potential benefits. If agriculture responds proactively to global warming they could actually increase yields by as much as 18 percent through actions like increased farming near the poles.

Governments are adapting to the new reality of climate change. In North America, most climate adaptation is occurring at the municipal level, focused on energy and infrastructure. National governments are instituting systems of adaptation including disaster response preparedness, coastal water initiatives in preparation for sea-level rises, managing water resources in anticipation of water shortages and preserving wilderness areas.

However, even with our best efforts the report says it will be far from easy to adapt, “the rate of climate change and complex inter-linkages with societal, economic, and political factors represent unprecedented challenges.”

Efforts to reduce greenhouse gas (GHG) emissions can still minimize some of the worst impacts of climate change. As explained in the report, reducing GHGs over the next few decades could “substantially reduce risks of climate change.”