Neatherlands Seeks Release of the Arctic 30 Through ITLOS 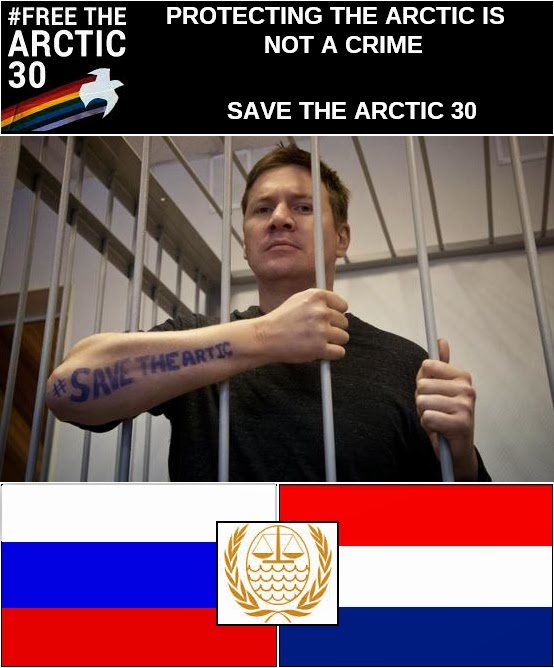 On Wednesday, November 6, the Netherlands brought a case before the International Tribunal for the Law of the Sea (ITLOS) seeking the release of the Greenpeace ship Arctic Sunrise and its Crew. In her petition for the release of the Arctic 30, Dutch representative Liesbeth Lijnzaadsaid said Russia had “violated the human rights” of the activists after detaining them for seven weeks “without grounds.”

The Arctic 30 have been detained in Russia since September 18, when the ship was boarded in international waters and the entire crew seized after a peaceful protest against Arctic oil drilling.

Russia did not attend the tribunal and said it does not recognize the case. Russia claims the activists posed a security threat. After initially charging the 30 with piracy, the charge was reduced to hooliganism which carries a jail sentence of up to 7 years.


Last week, Prime Minister Dmitry Medvedev reiterated the assertion that the Greenpeace protest action posed a threat to the Russian workers on board, as well as the ship.

Rene Lefeber, another Dutch government representative, told the Hamburg court that the seizure was illegal. He stated that while the area where the Greenpeace crew was arrested is considered an exclusive economic zone and gives nations the right to protect their natural resources, they do not have the right to board the ship, seize the vessel or detain the crew.

Tribunal president judge Shunji Yanai set Nov. 22 as the provisional date for a court decision. Under the United Nations Convention of the Law of the Sea, maritime disputes and decisions are binding in the Hamburg court. However, there is no way of enforcing the court’s rulings.

Related Articles
Greenpeace Crew Arrested in the Arctic by Russian Agents
Video – Show Your Support for the Arctic 30 on October 5: Defending the North is Not a Crime
Russia Drops Piracy Charges Against Arctic Protestors
Video – The Arctic is Under Threat from Shell and Gazprom
Video – Greenpeace Confronting Russia’s Arctic Oil Exploration
The Race to Exploit the Arctic’s Resources Ignores the Costs
Why the Fate of the Arctic Should be of Concern to Us All
The Arctic’s Dangerous Combination of Environmental Toxicity and Genetic Vulnerability
Russia Lining Up Investors for Arctic Drilling
Global Warming Exposes Resources but Arctic Meeting Leaves Some Out in the Cold
Video – The Global Implications of Rapid Climate Change in the Arctic