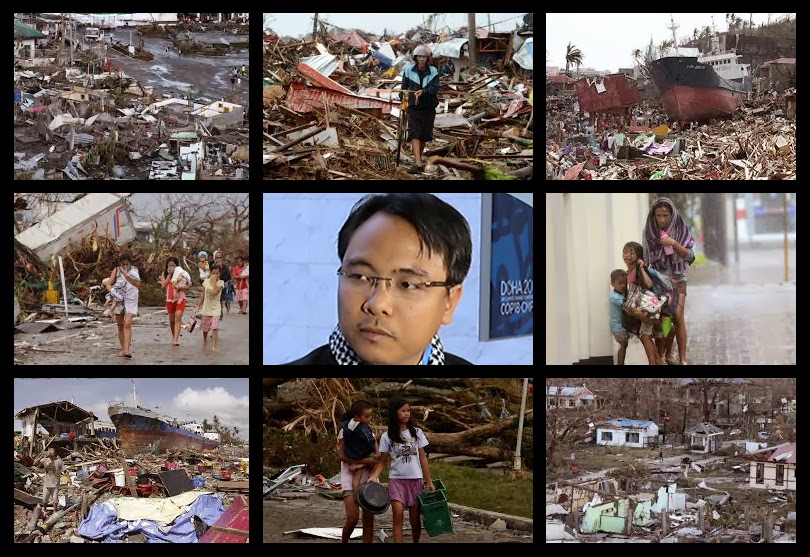 Typhoon Haiyan left a path of widespread devastation and according to the most recent reports it may have killed as many as 10,000 people in the Philippines. As climate delegates gather for COP 19 in Warsaw, Poland, vast numbers of people in the Philippines are mourning their dead and struggling to find food and water. Between 70 and 80 percent of all the structures in the storms path have been decimated. Entire towns have been leveled and at least 600,000 people are known to have been displaced by the storm.


Against the backdrop of this most recent storm, one of the most violent in human history, delegate at the latest round of U.N. climate talks are working to pull the world back from the brink of destruction. Climate models show us that this storm is a window into the future of what the world will look like if we continue on our current trajectory.

As explained in the second quarter of the UN’s AR5 report, violent storms will occur more often if we continue with business as usual and those in Asia, particularly the poor, will be the hardest hit. Climate change is devastating to us all, but as an Asian nation, with a large number of poor people, the Philippines is especially vulnerable as this densely populated nation is surrounded by the warming waters of the Pacific.
According to meteorologists the strength of Typhoon Haiyan is largely attributable to a nearly 2 degree Fahrenheit rise rise in ocean temperatures.

While scientists are always cautious about attributing any individual storm to climate change, it is clear that violent storms are exacerbated by warming seas, and as a consequence climate change plays a salient role in these types of extreme weather events.

Officials from the Philippines present at the climate negotiations in Warsaw are unreservedly  blaming the apocalyptic storm on climate change.

Naderev “Yeb” Saño, lead climate negotiator for the Philippines in Warsaw, has heard first hand accounts of death and devastation from his family. He put a voice to the destruction wreaked by the Typhoon when he offered the following comments,

“To anyone who continues to deny the reality that is climate change, I dare you to get off your ivory tower and away from the comfort of you armchair,” he said. “I dare you to go to the islands of the Pacific, the islands of the Caribbean and the islands of the Indian ocean and see the impacts of rising sea levels; to the mountainous regions of the Himalayas and the Andes to see communities confronting glacial floods, to the Arctic where communities grapple with the fast dwindling polar ice caps, to the large deltas of the Mekong, the Ganges, the Amazon, and the Nile where lives and livelihoods are drowned, to the hills of Central America that confronts similar monstrous hurricanes, to the vast savannas of Africa where climate change has likewise become a matter of life and death as food and water becomes scarce. Not to forget the massive hurricanes in the Gulf of Mexico and the eastern seaboard of North America. And if that is not enough, you may want to pay a visit to the Philippines right now.”

“What my country is going through as a result of this extreme climate event is madness… The climate crisis is madness. We can stop this madness. Right here in Warsaw. Typhoons such as Haiyan and its impacts represent a sobering reminder to the international community that we cannot afford to procrastinate on climate action.”

He also thanked those who are working tirelessly to encourage action on climate change,

“I thank civil society, both who are working on the ground as we race against time in the hardest hit areas, and those who are here in Warsaw prodding us to have a sense of urgency and ambition. We are deeply moved by this manifestation of human solidarity. This outpouring of support proves to us that as a human race, we can unite; that as a species, we care.”

Saño was also the lead negotiator for the Philippines at last year’s Climate Conference in Doha, where he offered the following haunting and heart-felt warning, following Typhoon Bopha:

“[W]e have never had a typhoon like Bopha, which has wreaked havoc in a part of the country that has never seen a storm like this in half a century. And heartbreaking tragedies like this is not unique to the Philippines, because the whole world, especially developing countries struggling to address poverty and achieve social and human development, confront these same realities. …”

“I appeal to the whole world, I appeal to the leaders from all over the world, to open our eyes to the stark reality that we face. I appeal to ministers. The outcome of our work is not about what our political masters want. It is about what is demanded of us by 7 billion people.”

“I appeal to all, please, no more delays, no more excuses. Please, let Doha be remembered as the place where we found the political will to turn things around…The outcome of our work is not about what our political masters want. It is about what is demanded of us by 7 billion people…”

We would be wise to heed Saño’s words, the prospect of delaying progress on a binding international treaty can only be described as sadism. One of those on the ground echoed the sentiments of many when she described the situation as “hell.” This is something for delegates to consider as they work towards a global binding treaty.

“We can take drastic action now to ensure that we prevent a future where super typhoons are a way of life,” Saño said recently. “Because we refuse, as a nation, to accept a future where super typhoons like Haiyan become a fact of life. We refuse to accept that running away from storms, evacuating our families, suffering the devastation and misery, having to count our dead, become a way of life. We simply refuse to.”

Sano concluded, “Let Poland, let Warsaw, be remembered as the place where we truly cared to stop this madness. Can humanity rise to this occasion? Mr. President, I still believe we can.”

Leaders who ignore efforts to forge an agreement or worse those who actively try to undermine such an outcome, are condemning people to death and playing an active role in creating hell on earth.