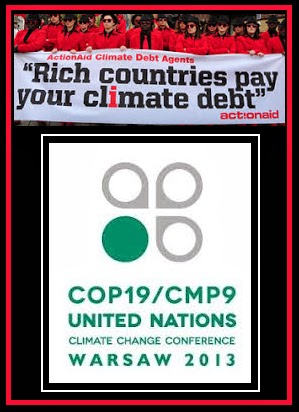 Two extreme weather reports released at COP 19/CMP 9 lend support to the need for climate finance. The UN has indicates that this year was one of the warmest years on record and a Global Climate Risk Index shows that the countries most vulnerable to extreme weather are also some of the poorest. The top ten warmest years on record have all occurred since 1998. On Wednesday November 10 the UN declared that the first nine months of 2013 were the seventh warmest on record since records began in 1850. 2013 is tied with 2003 with an average global land and ocean surface temperatures 0.48C above the 1961-1990 average. WMO secretary general Michel Jarraud indicated that growing levels of anthropogenic greenhouse gases (GHGs) mean that warming is inevitable.

The World Meteorological Organisation (WMO) further announced that there is a trend of extreme weather and they stated that the impact of storms like Typhoon Haiyan are being exacerbated by rising sea levels. While it is impossible to attribute an individual weather event to climate change, that should not be taken to mean that there is no relationship. They clearly stated that rising seas make coastal populations more vulnerable to storm surges. Seas have risen by about 20 cms (8 inches) in the past century.


In addition to Typhoon Haiyan, one of the most intense storms in history, the WMO report referenced extreme weather events like Australia’s 2013 heatwave, and widespread floods (from Sudan to Europe). Japan was also mentioned due the fact that 2013 saw the nation’s warmest summer on record.

As explained in the recent IPCC AR5 report, scientists predict with increasing certainty (95% up from 90%) that humans are the cause of global warming. The report also indicates that in a warming world we can expect more extreme weather along with rising seas.

The Global Climate Risk Index index was assembled by a think tank called Germanwatch with data from Munich Re, it indicates that some of the poorest nations are also the most vulnerable to extreme weather. The index lists the ten countries most affected by climate change in 2012. Ironically, the countries that are suffering most have contributed the least GHGs.

The Philippines and Haiti made both lists. As developing countries, these nations are ill equipped to deal with extreme weather. Lending support to the need for climate finance, a subject that many hope will garner support at this years climate negotiations in Warsaw.

Send a Message to Climate Negotators at COP 19/CMP 9: Typhoon Haiyan is a Wake-Up Call